"The art I admire the most is the kind I understand the least, and keep on not understanding. It shows, uncompromisingly, that another world is possible, and that neither the world the 99 percent struggles with, nor the one enjoyed by the one percent, are good enough to settle for." - Paul Chan 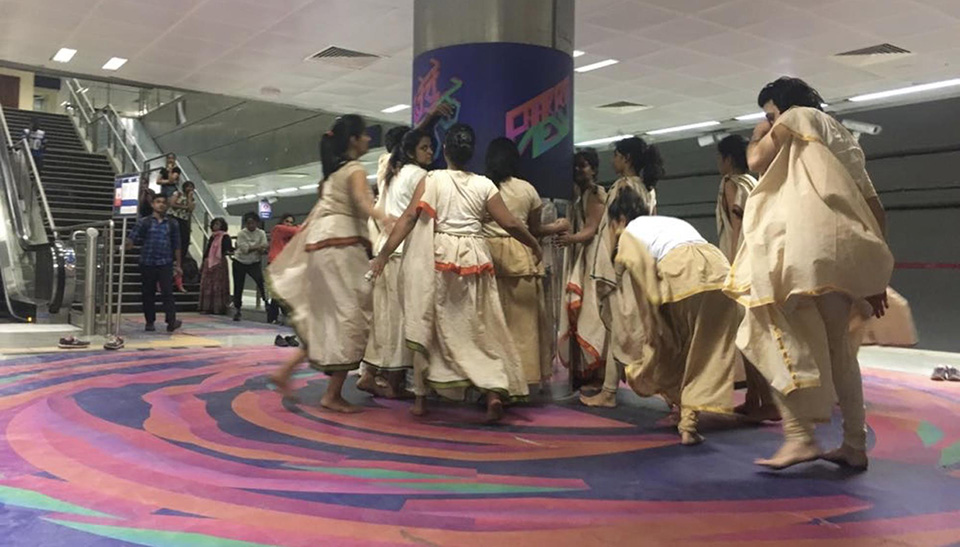 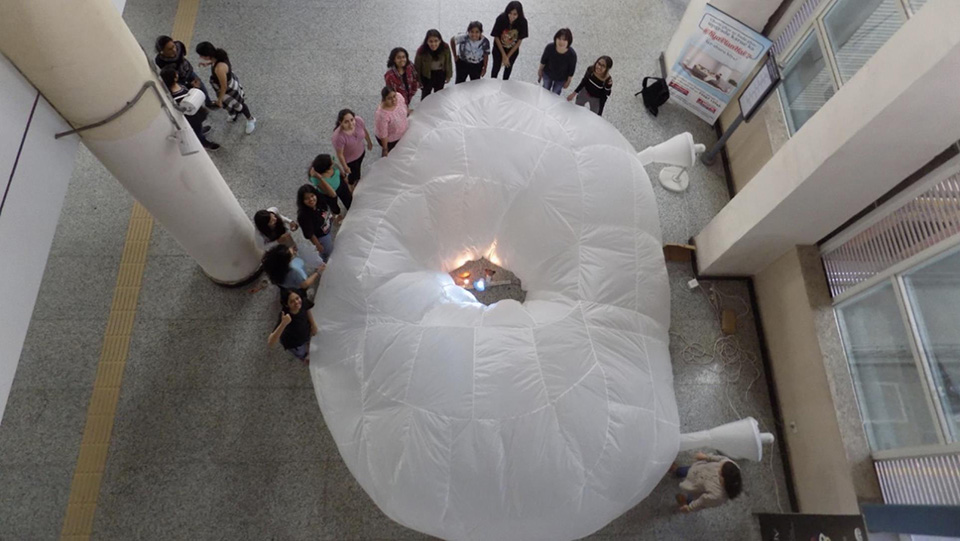 How can metro stations be more than just a transit hub? Over the past 6 years, Art in Transit has explored the potential for metro stations to be a space for place-based learning beyond classrooms walls. This project offers us an immersion in communities and an opportunity to celebrating the uniqueness and character of neighbourhoods around the metro stations and across the city.

Art in Transit is a public art, design and pedagogic initiative facilitated by the Srishti Institute of Art Design and Technology Bangalore, in collaboration with the Bangalore Metro Rail Corporation and city based artists and arts organisations. Art in Transit seeks to develop a sense of belonging and interaction with the city of Bangalore as a vibrant, creative and inclusive space. Recognising the rapid pace of growth, movement, and development in the metropolis of Bangalore, Art in Transit uses art, design and technology to stimulate dialogue between people and the urban spaces that they inhabit.

Since January 2014, over 700 students and 200+ city, national and international artists and 20+ faculty have studied, researched and executed temporary and permanent public art and design projects at the Peenya, Chickpete, Cubbon Park, MG Road and Majestic Metro Stations. Art in Transit has developed a model for Undergraduate and Masters art and design courses in public art, public art festivals, multi-age & multi-lingual creative workshops (open to public participation) and a variety of other events, collaborations and interventions which are open and accessible for all to participate at Metro stations in Bangalore. The project has also developed knowledge – tools and methods for place-based design research. Students, faculty and artists have worked in partnership with Metro staff and engineers to execute projects at the stations that take into consideration, aesthetics, local information, and identity, safety, and commuter flow. The primary intention has been to use art and design as a medium for public dialogue and to develop a fluidity of inclusive public art practice in Bangalore City which is imaginative, informative, meaningful, and mindful. Through research and practice, the project explores themes of place and placelessness, language, diversity, migration, ecology, technology and more.

Since 2019, Art in Transit has expanded our work with the Metro Neighbourhood Initiative - a consortium of city organisations seeking to activate the metro spaces and community spaces. As part of this project we are now working at Lalbagh, Cubbon Park, Indiranagar, Vijaynagar and Rajajinagar Stations. The project has sustained through multiple changes at the BMRCL administrative level and continues to learn and adapt with each new administration. Students and faculty learn to work with government and city partners through art and design practice. 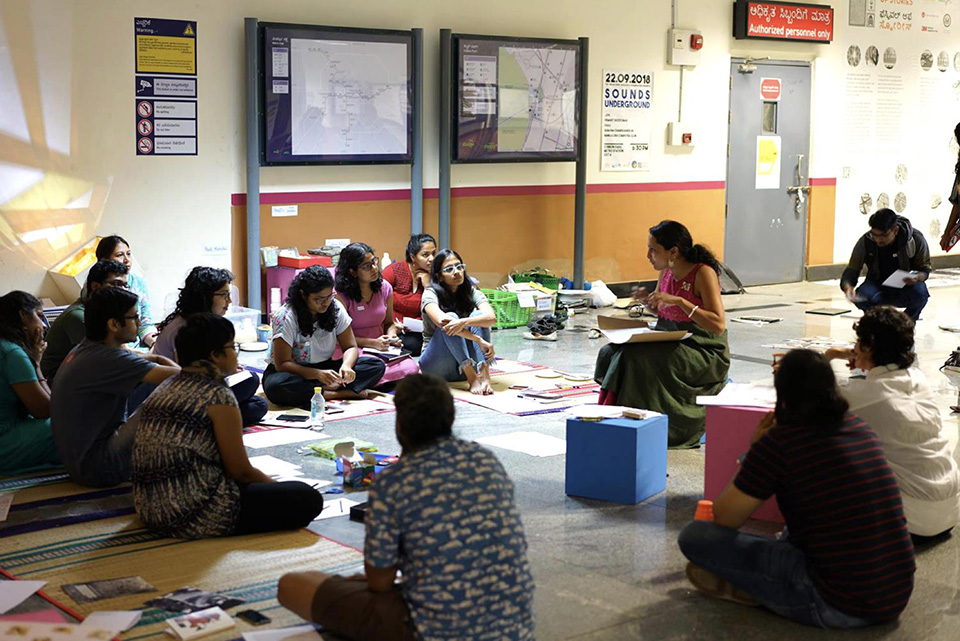 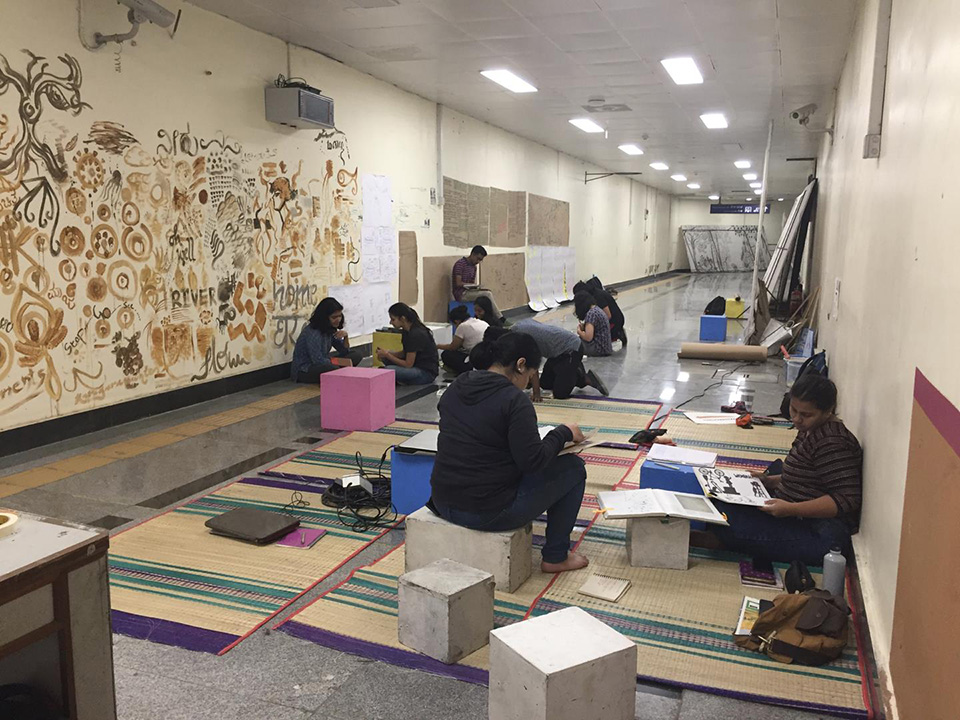 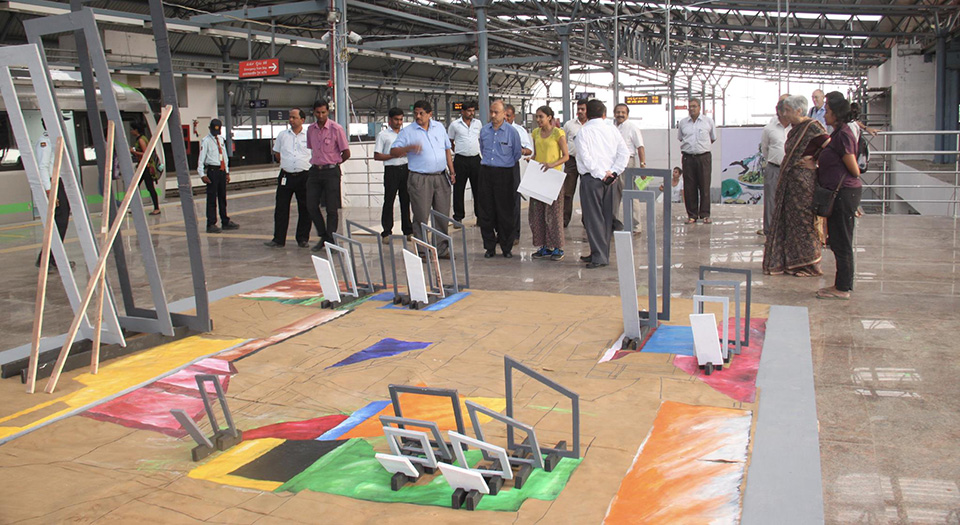 In 2019 Art in Transit, in partnership with United Way of Bengaluru (UWBe) and other city organisations such as Native Place, Bengaluru Science Gallery, Wipro, Hasirudala, Eco Edu and The Azim Premji Foundation started a pilot project for the Metro Neighbourhood Initiative. The Metro Neighbourhood Initiative (MNI) sees the potential for metro stations to be a creative community resource and an opportunity to celebrating the uniqueness and character of neighbourhoods around the stations. The MNI pilot project is active at Cubbon Park, Indiranagar, Lalbagh, Rajajinagar and Vijayanagar, Metro Stations and the themes being explored, are around Ecology and Sustainability, Community Heritage and History, Art and Science, Creative Learning and Women’s Safety.

In December 2019, Srishti Live kicked off the Metro Neighbourhood Initiative with the Festival of Ideas. Through a myriad of events, ranging from exhibitions, workshops, collaborations and interventions, 300 students 15 artists worked at the stations for a duration of 1 month. 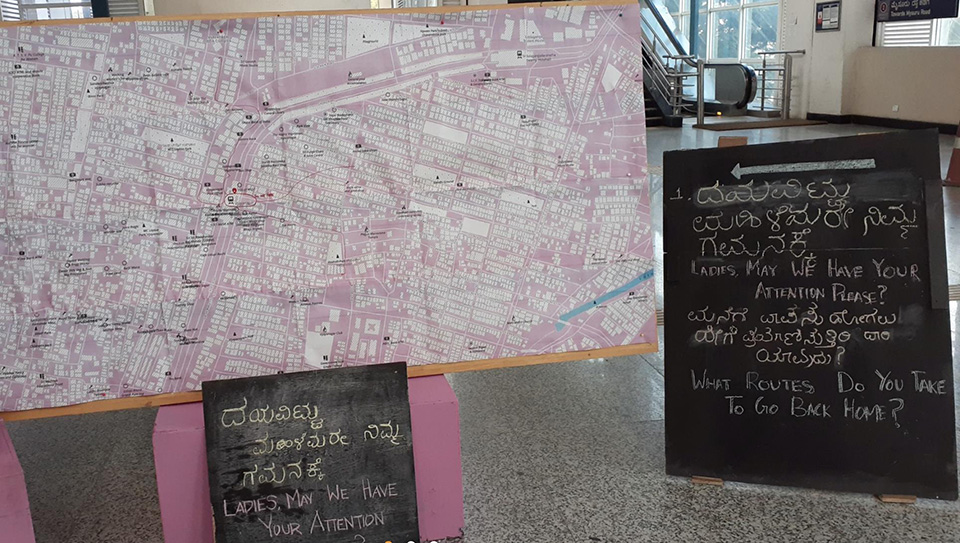 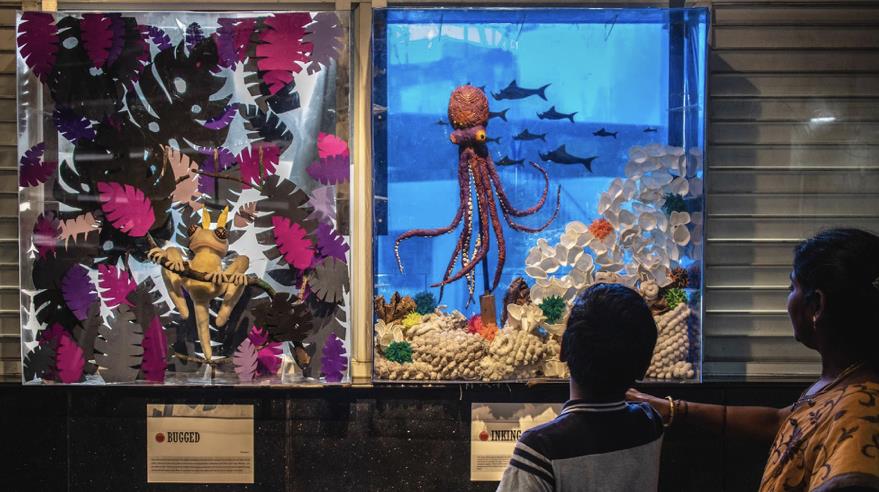 While Bengaluru’s water crisis has long been in the limelight as a matter of academic, social and political debate amongst the leading experts and thinkers of the city, a lesser known effort by the Mannu Vaddars of the Bhovi community of Bengaluru may finally be providing a sustainable and long term solution to this crisis - the traditional practice of digging recharge wells to revive the fast-receding underground water table of the city.

In an attempt to make the stories and processes surrounding this practice accessible and visible to the citizens, Art in Transit, collaborated with ecological design experts, Biome Environmental Solutions to develop projects at Chikpete and Cubbon Park Metro Stations.

At Cubbon Park Metro, students from the Explanations as Stories and Picturing Processes & Phenomena undergraduate courses at Srishti, organized a series of masterclasses with pertinent groups and individuals in the field such as Biome, Kavya Sanje, Deepta Satish, Jackson Porretta and Krishnan MB to conceptualize a narrative that ties together the historical, ecological, cultural and social contexts of water in the city. This research process culminated with the designing of a large mural at Cubbon Park Metro Station, using only paint derived from mud extracted in the digging of the 65 recharge wells that Biome is facilitating within the park.

On 16th & 17th November 2019, a community paint and poetry event was hosted by Art in Transit at the Cubbon Park Metro station, inviting the public to engage with the project and the well-diggers who are changing Bengaluru’s water future. The event hoped to make visible this vital work of the well diggers and encourage citizens of the city to reach out to them to dig wells in their homes and communities. This project is supported by Bengaluru Sustainability Forum and BMRCL 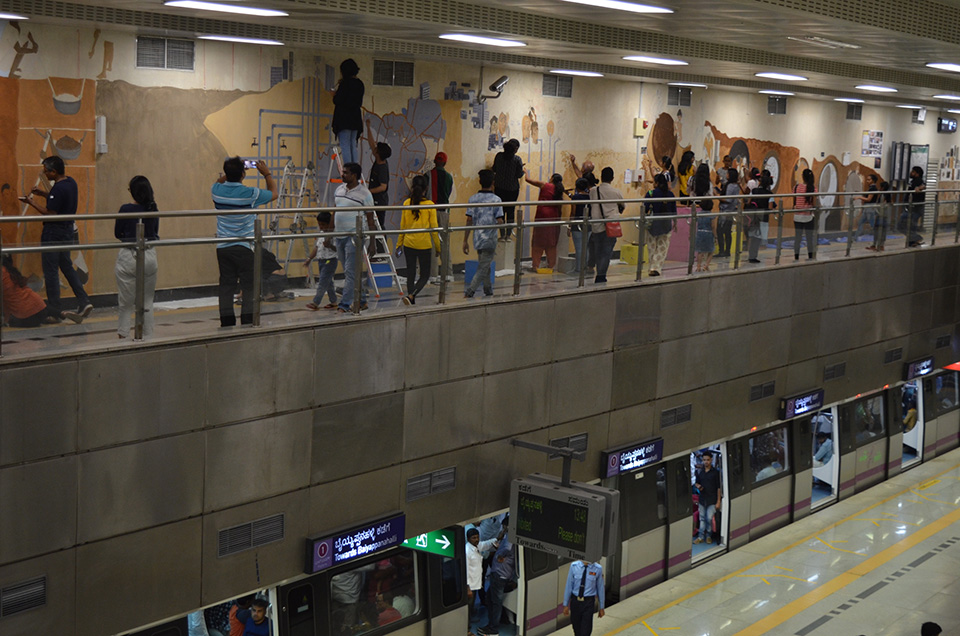 Collaborations:
Art in Transit has built collaborations with many partners locally and internationally. Some of our longstanding partnerships have been with the San Francisco Asian Art  Museum and San Jose Tech Museum and with the Bangalore San Francisco Sister City Project. Our current local partners are BIOME, Native Place, One Shanthi Road, Kaavya Sanje, Hasirudala and more.

Dataprint is a multy-city performance, and technology installation. A collaboration with international artists from Khymera Productions. The event took place at the San Jose Tech Museum and Bangalore at the Cubbon Park Metro Station, and used performance and interactive theatre to make commuters aware of issues of Data Privacy. Picture Credits: Srishti Institute, Ajith Samuel

Art in transit collaborate with members of the city and Srishti faculty to continually facilitate courses and workshops at the Metro Stations. One of the critical philosophies of the project is to move Bangalore to be a learning city. We work intentionally on a Public Pedagogy model and partner and encourage a host of learning experiences at the Metro Stations.

This year students of the Living Library and Laboratories Course have been working at Lalbagh Metro Station developing ecologically guided projects at the station. Students of the Stories as Explanation and Picturing Processes & Phenomena work at the Cubbon Park Metro Station to develop a mud mural telling water stories of Bangalore. Art in Transit has also collaborated with Native Place to facilitate the Memory Maps workshop series, open to a larger public.

Art in Transit uses art, design and technology to stimulate dialogue between people and the urban spaces that they inhabit. As a place-based project, some of the themes that have been explored are around migration, ecology, women’s safety, technology and the city. Faculty and students have studied, researched and executed temporary and permanent public art and design projects at Metro Stations across the city. The project has facilitated public art festivals, multi-age & multi-lingual creative workshops (open to public participation) and a variety of other events, collaborations and interventions which are open and accessible for all to participate at Metro stations in Bangalore. The project has also developed knowledge – tools and methods for place-based design research. Students, faculty and artists have worked in partnership with Metro staff and engineers to execute projects at the stations that take into consideration, aesthetics, local information, and identity, safety, and commuter flow. Art in Transit is also a partner with the Metro Neighborhood Initiative that strives to build a sense of belonging between stations and their neighbourhoods. Given all these opportunities for learning from and in the public sphere, Art in Transit invites applications for an apprentice program with us. As an apprentice you will be supported to develop site specific, place-based research and projects at one of the many stations that Art in Transit works at. 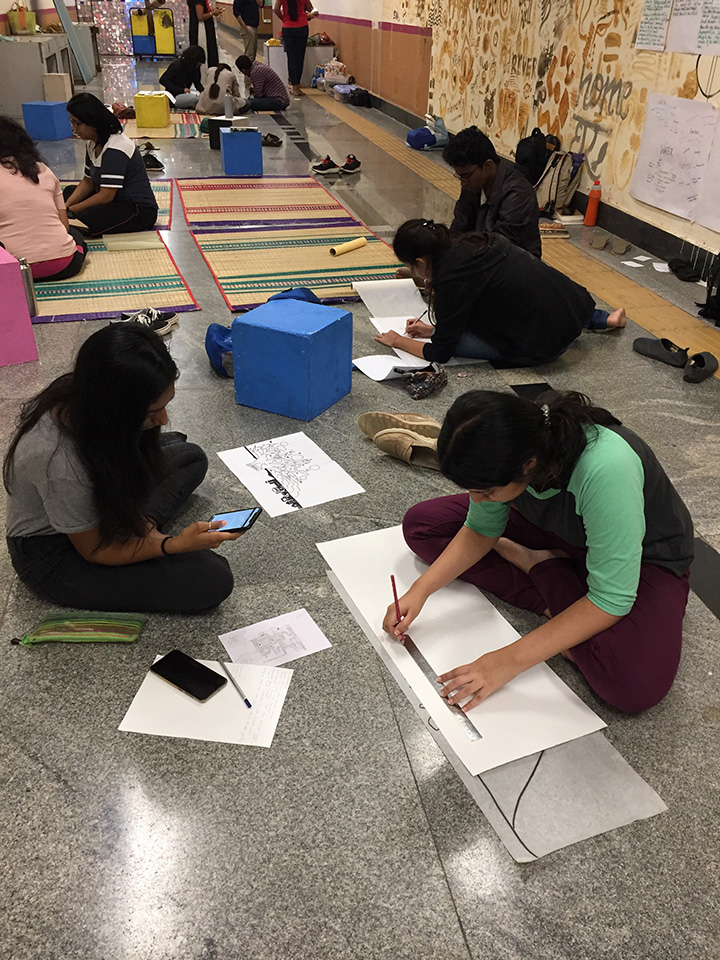 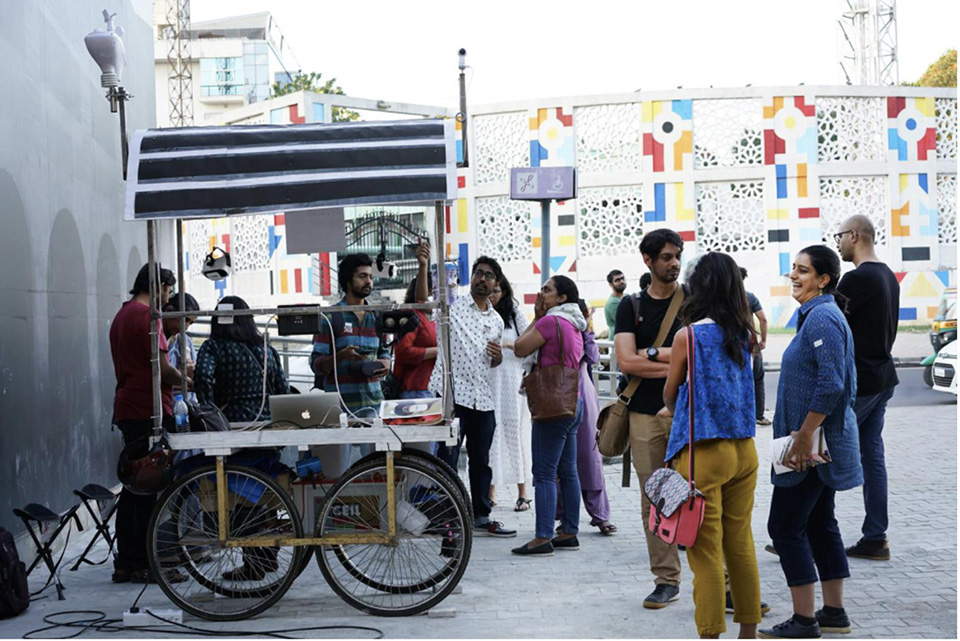