“Towards a day where we will never have to carry the weight of silence, shame and blame, for experiencing sexual violence. Unite to build - #INeverAskForIt. 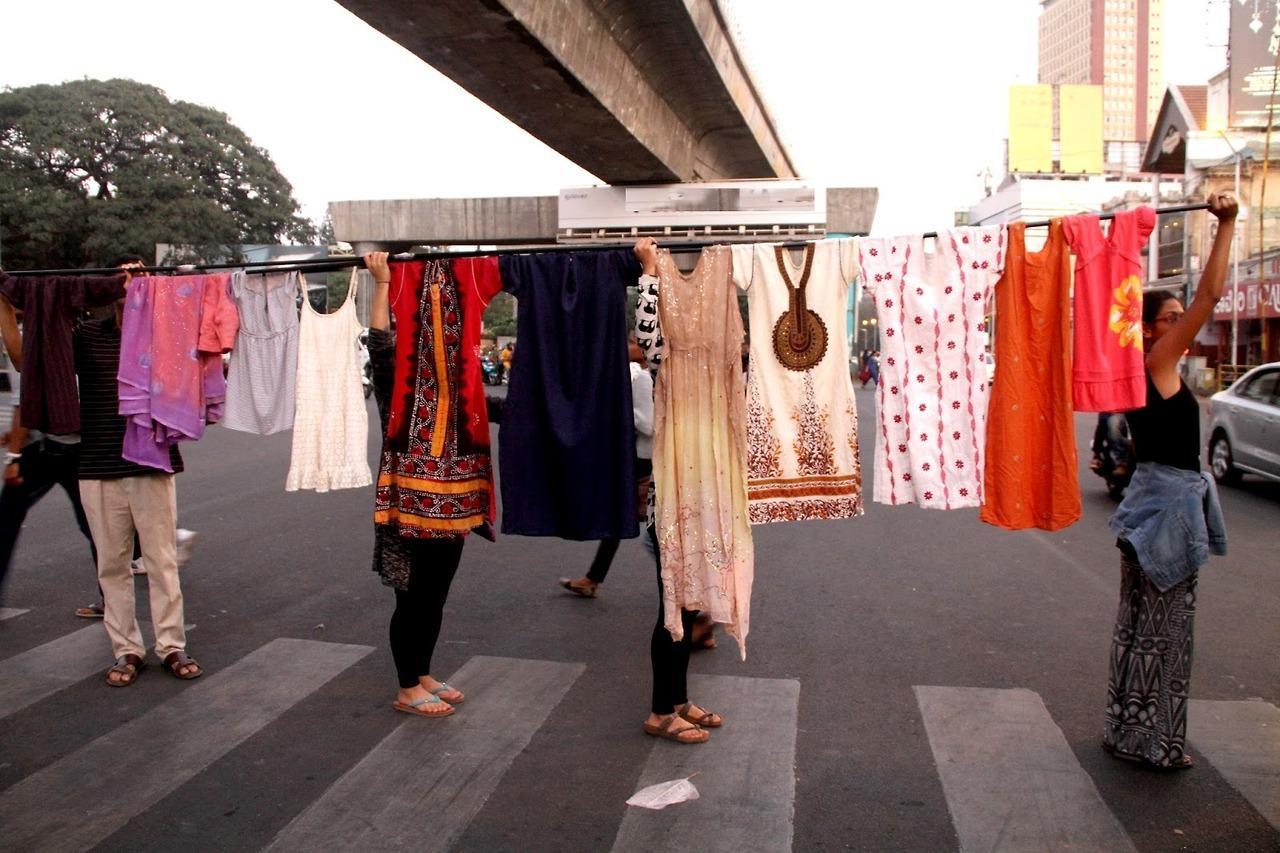 Eeshita Kapadiya + Advisory board, Trustees along with community of Action Sheroes/ Heroes/ Theyroes - members of public volunteering at Blank Noise, to take agency in ending sexual and gender based violence and victim blame.

Blank Noise mobilises citizens and persons to take ownership of sexual and gender based violence. It affirms the power , potential and capacity of every individual to influence a safe space, thereby becoming an Action Shero, Hero, Theyro.

Blank Noise is built on the lived experiences of survivors of violence. Its methodologies are rooted in community listening and collective insight.

Blank Noise builds ideas for public action towards ending violence against women, girls and all persons. Blank Noise engages publics through a range of projects designed to shift the climate of fear, warnings and victim blame.

Blank Noise works to confront the narratives and politics of fear by building projects rooted in creating empathy, connection and trust.

Blank Noise affirms the power of the collective. It proposes a call to action rooted in desire and building new memory for a place and the body. Collective action such as Meet To Sleep, Being Idle or Walk Alone/ Together enable women to build acts of solidarity.

Blank Noise is a space to think, reflect, process for persons across identities. It is an invitation to be self confrontational in understanding fear, bias, privilege and invisible forms of patriarchal power.

Blank Noise is rooted in socially engaged art practice and feminist movement building. It has been built by public engagement. In 2015 it became a registered trust.

It engages publics and communities through a range of participatory projects. Blank Noise researches the personal and public memory of shame, blame through its #INeverAskForIt mission.

I Never Ask For It is built by garment testimonials and audio testimonials. This project is towards building a public archive.

Research focus including student led movements and resistance in response to victim blame and patriarchy on campuses.

Reporting To Remember , is a community led research project archiving a public memory of victim blame, as experienced by women, girls, and persons, caused by persons in power.

Blank Noise has been built by thousands of Action Sheroes over 17 years. AnAction Shero Oral Herstory archive that documents the contribution, experiences of individuals and their role in building Blank Noise.

Blank Noise works to end victim blame by inviting women, girls and persons to bring the garment they wore when they experienced violence. The garment is memory, witness and voice. Each garment is present to say#IneverAskForIt. Blank Noise and its #INeverAskForIt mission are working towards a large scale public installation ; where ten thousand garment testimonials will unite at sites of public significance by 2023.

Blank Noise and the I Never Ask For It mission archive garment, audio and video testimonials survivors of violence. The mission works with personal and public memory. The practice is rooted in building personal and collective healing.

Short term/ ongoing I Never Ask For It

Meet To Sleep invites women, girls, persons beyond gender binaries to sleep anywhere under the open sky; be it parks or open fields. It calls for all to assert and claim the right to live free from fear and defenceless.The action has been built alongside over 45 organisations across over 90 sites in towns, cities, villages in India. 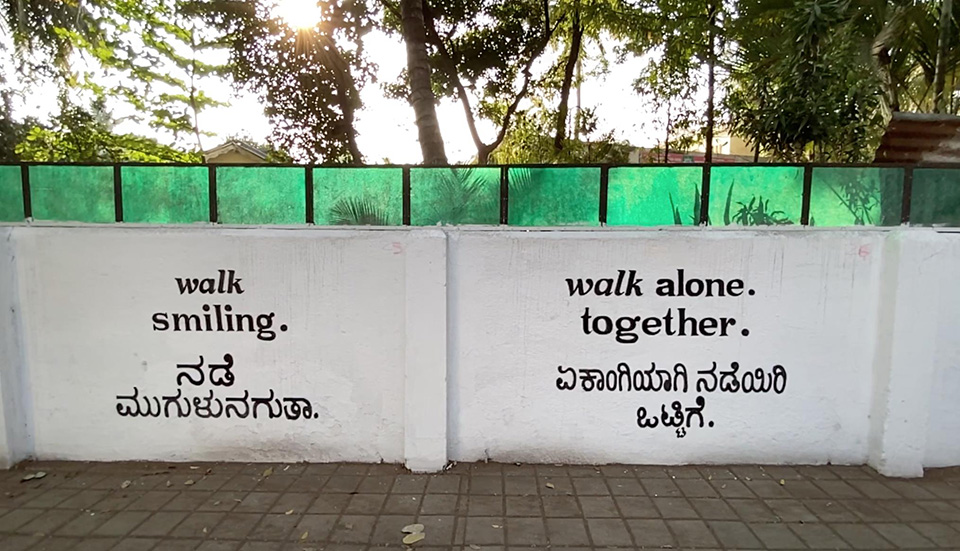 Step By Step Guide To Unapologetic Walking is a text guide for women, girls and persons beyond gender binaries to walk free from fear. The text is published along city walls to accompany women, girls and as they walk their city.

The pilot text wall publication was built with the support of Srishti Institute of Art Design and Technology and BBMP. It was initiated by Bangalore Police and the Karnataka State Commission For Women. 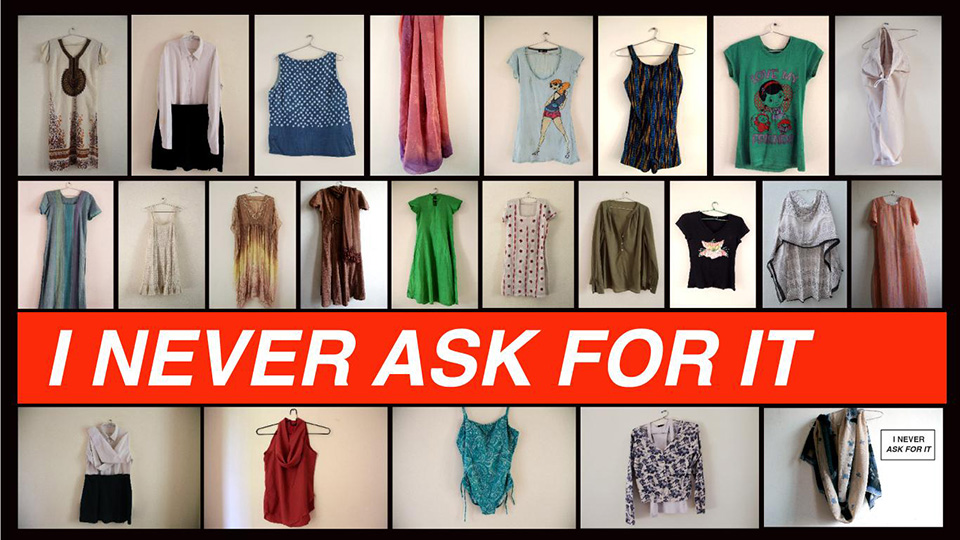 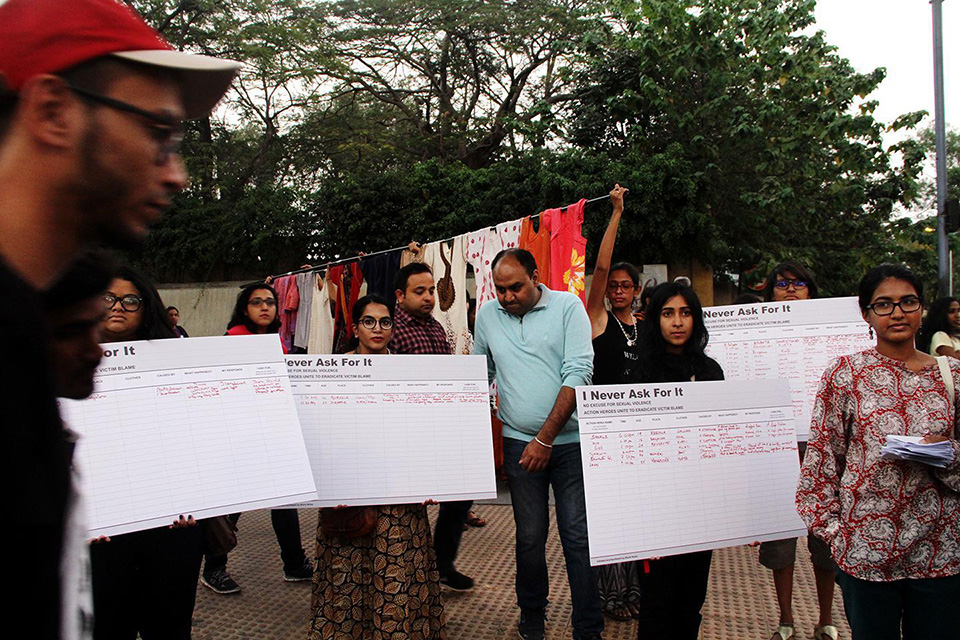 Citizens, individuals also known as ‘Action Sheroes/ Heroes/ Theyroes’ unite to end victim blame by building mission #INeverAskForIt, with Blank Noise. In this photo, street intervention ‘Walk Towards Healing’ Action Sheroes mobilise to walk with garment testimonials of sexual violence; an act of shouldering public responsibility of the issue.Members of the public take turns to carry the garments and add written testimonials.

#INeverAskForIt efforts are built with several alliances including members of the public, colleges, civil society groups , feminist collectives and more. 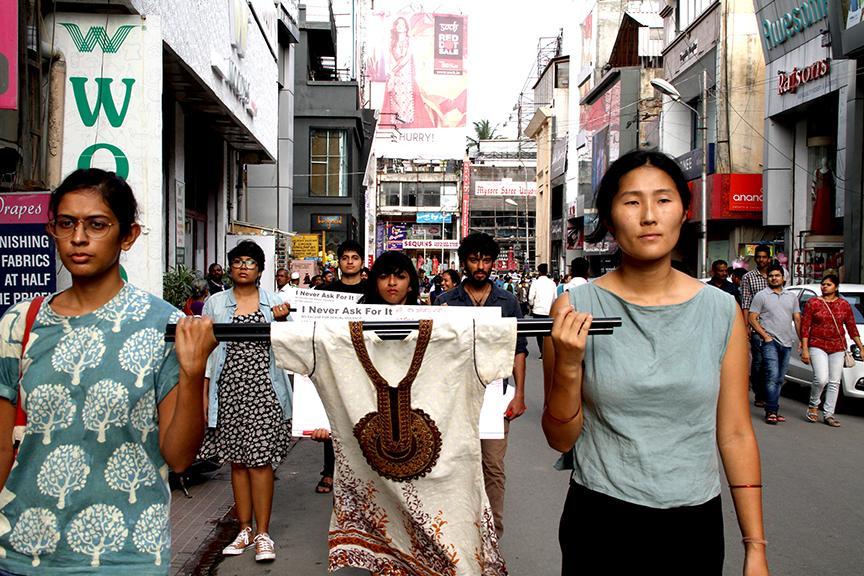 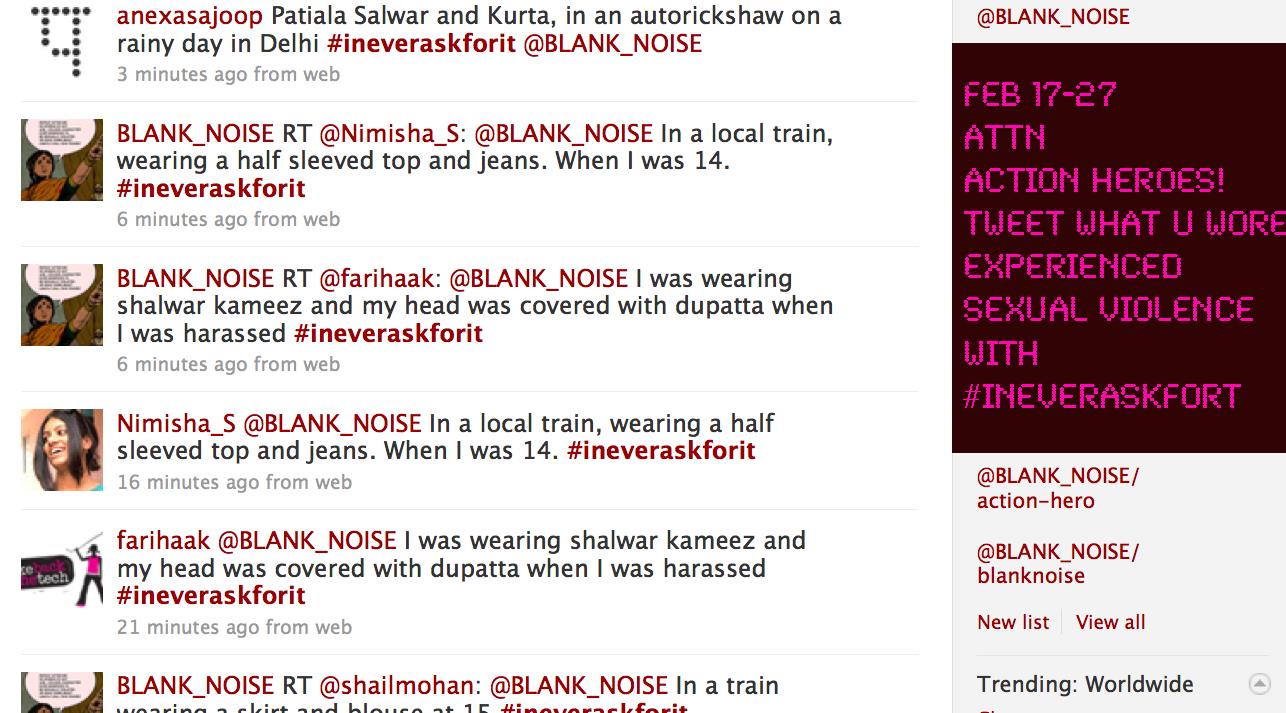 Tweetathon (2009) #IneverAskForIt Individuals on twitter built testimonials by sharing the clothes they wore when they expereinced sexual violence. 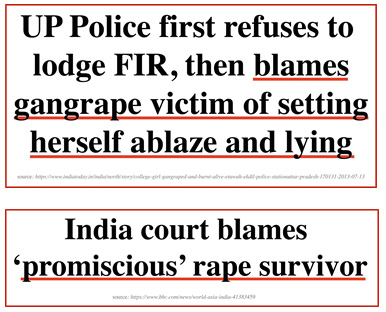 Slides from the #ReportingToRemember document. #ReportingToRemember is a pledge to never forget. It documents the public memory of shame and blame. It has been built by several interns, fellows, researchers over the years. The research project is located within the I Never Ask For It mission. 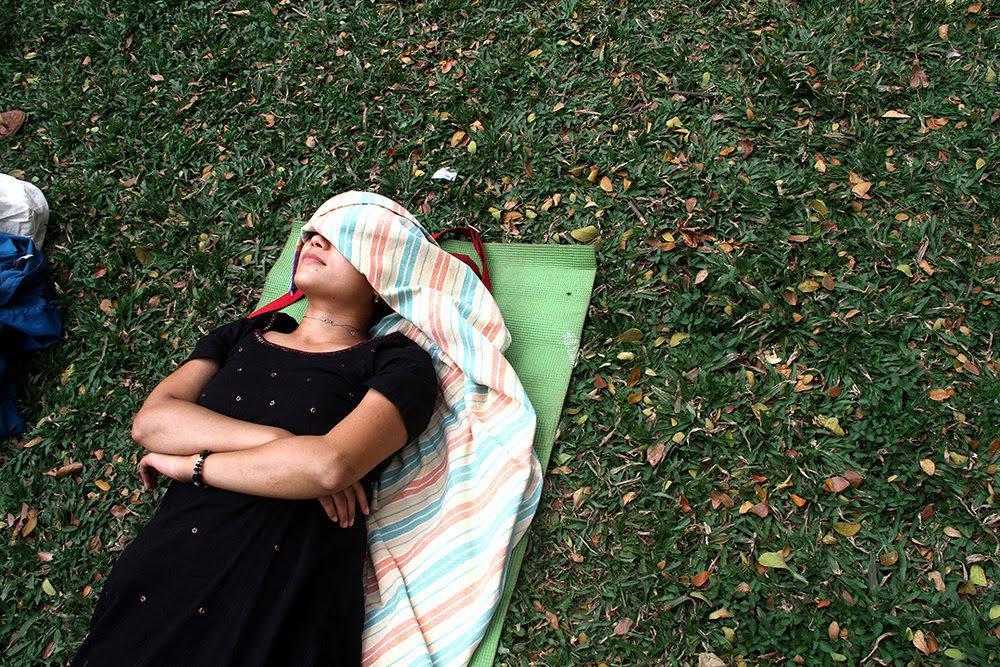 Action Sheroes #MeetToSleep : Women ,girls and persons sleep in the open, in parks and fields, across geographies and regions , urban and rural, asserting their right to live free from fear and defenceless. The action is built in alliance with feminist organisations, allies across India and beyond. (2014- ongoing). 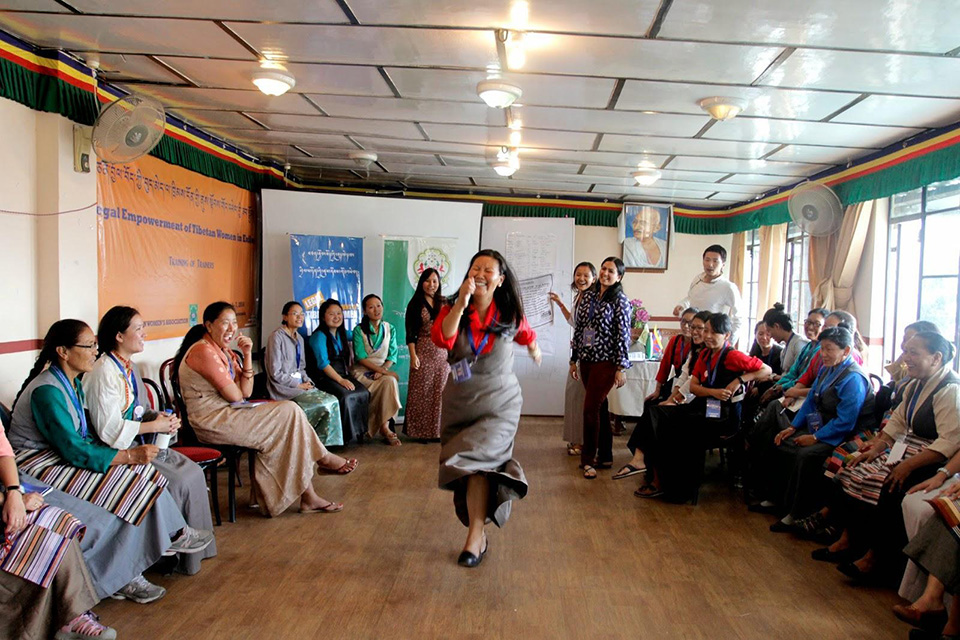 Workshop with feminist allies including the Tibetan Women’s Association (2014)on the #INeverAskForIt mission: the group examined the relationship between fear, warnings and blame. 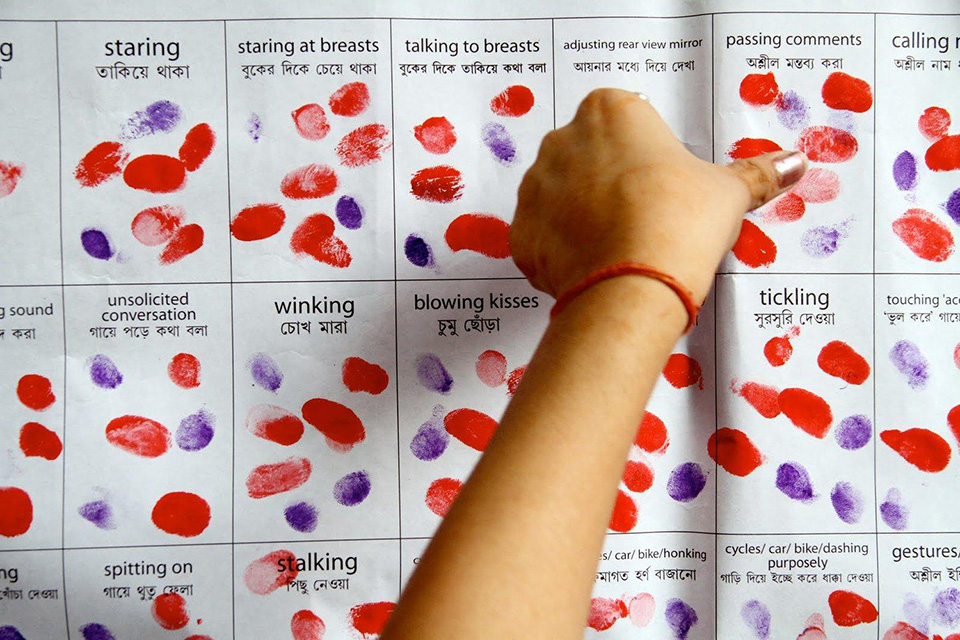 Blank Noise emerged in response to street harassment in 2003 at a time when street harassment was perceived as a non issue , globally. It devised methodologies to trigger public discourse on the issue. The Street Harassment opinion poll (2005) was built by a core team of Blank Noise volunteers/ Action Sheroes/ Heroes. It invites persons to place a thumbprint on what they consider a violation in public space. The poll is bi lingual. In this photo languages : English and Bengali. 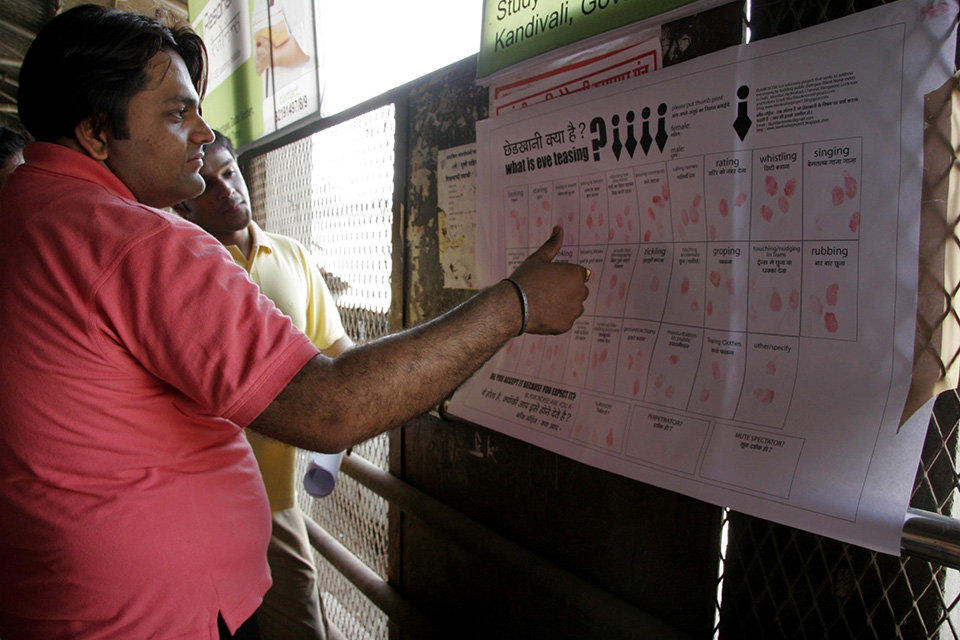 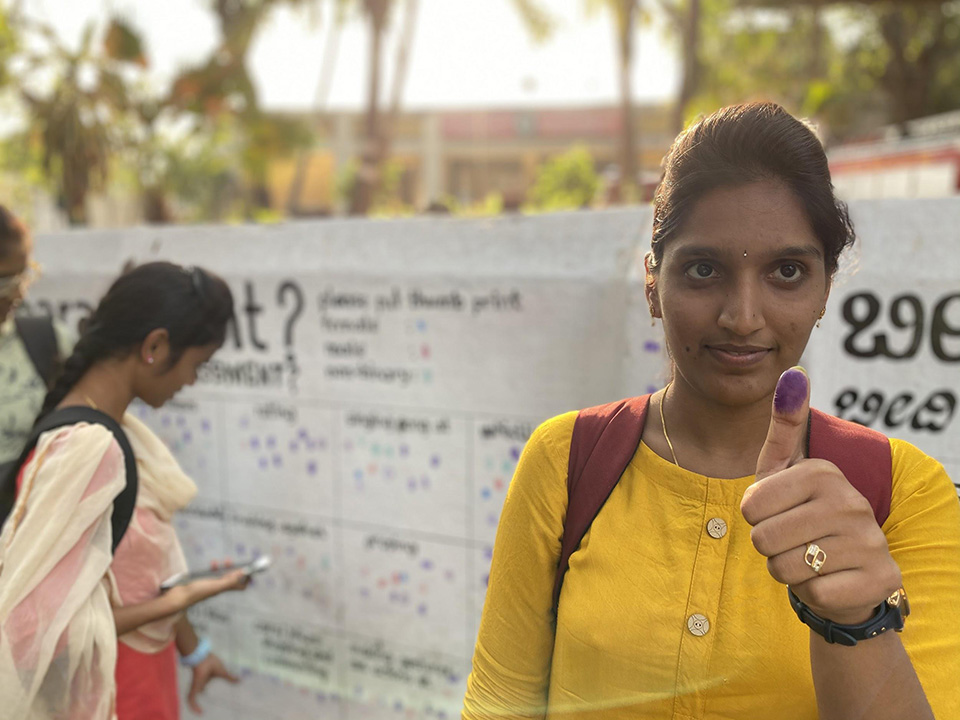 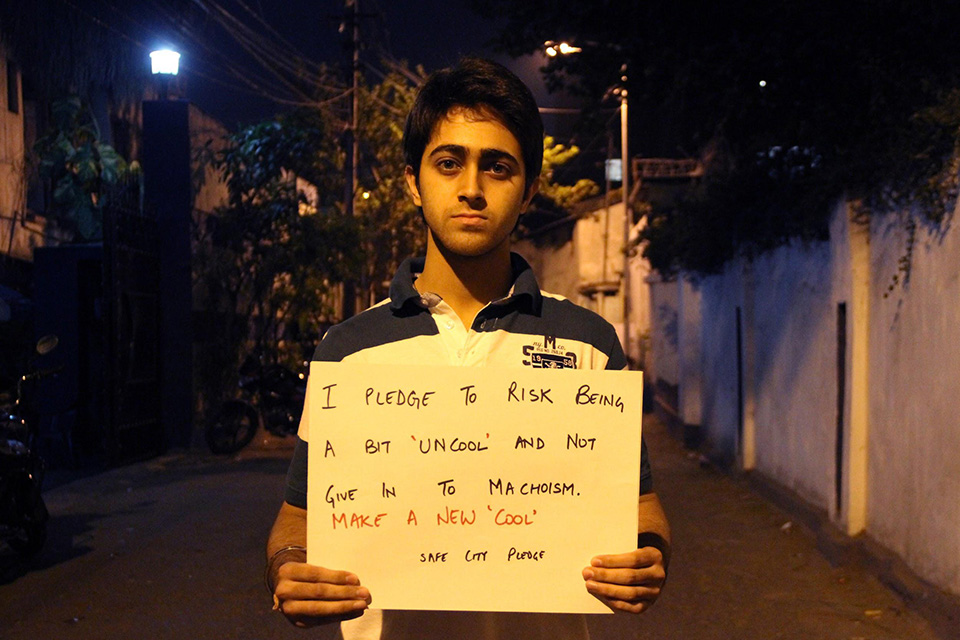 Thousands of persons , and communities stepped in after Jyoti Singh’s gangrape and murder to take the #SafeCityPledge. Each person identified a small step they would take in their capacity to influence change. Action Hero Jatan pledges to risk being uncool in a climate of toxic masculinity, and not give into machoism. 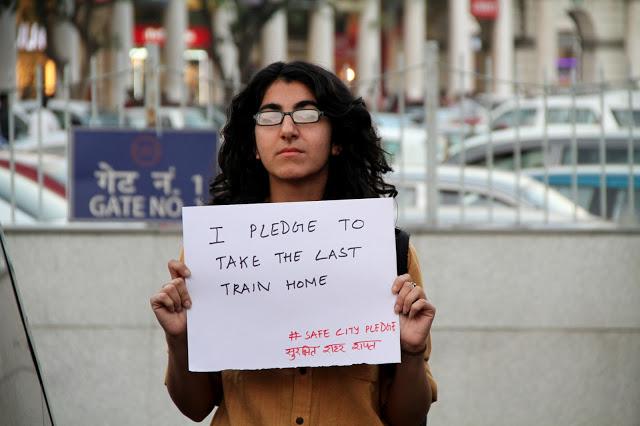 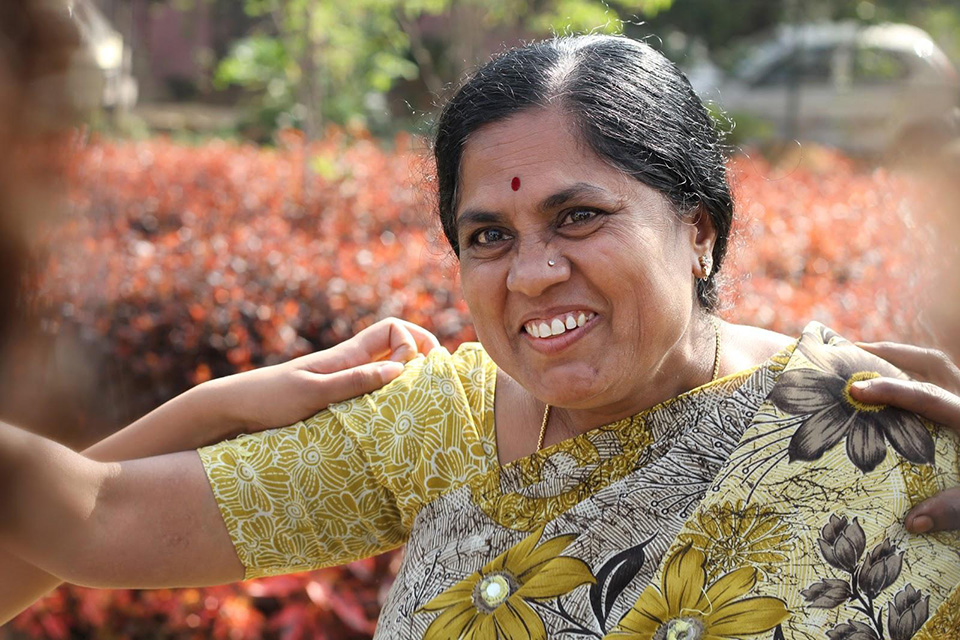 Action Shero Yashodha, Hahaha Sangha (2012).The Hahahah Sangha brought together generations of women and Srishti students to gather in Yelahanka’s neighbourhood park to laugh, foster friendships and initiate belonging in the neighbourhood. 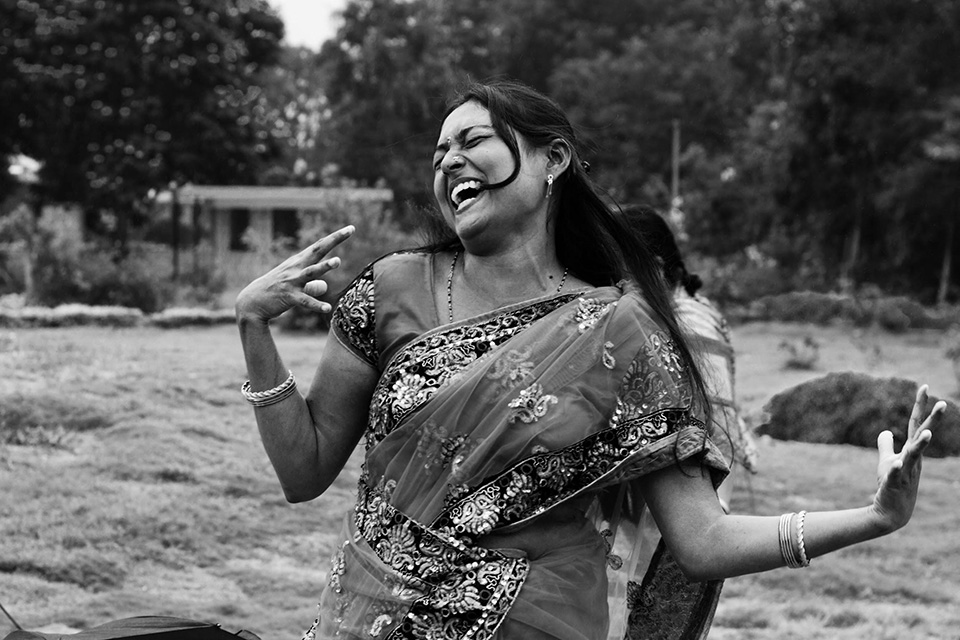 TED Talk (2017) TED Talk collaborates with Star Plus to programme #TEDTalksIndiaNayiSoch where Patheja was one of the speakers. https://www.ted.com/talks/jasmeen_patheja_everyone_deserves_to_be_saf


2013- ongoing: Artist in Residence at Srishti Institute of Art Design and Technology, Bangalore.

Blank Noise offers a year long apprenticeship and three month internships to students and professionals. Your engagement with Blank Noise calls you to roll sleeves and meet the many aspects of socially engaged art practice and feminist movement building. You could immerse yourself in community engagement.You could support managing event productions.

You could contribute to ongoing research. You can also participate in street interventions, events, workshops and live actions by signing up to volunteer as an Action Shero/Hero/Theyro at Blank Noise.

We have been built by the public; volunteers across disciplines and identities, like you, who have believed in the mission and furthered it.

For more information about this Lab, kindly email Jasmeen Patheja at jasmeen.patheja@manipal.edu