Humans were designed very badly to understand the universe they live in. Our senses filter out almost all the kinds of energy that reach our body. We develop ideas and intuitions based on our sensory experience of phenomena at our own physical and temporal scales. Scientists today obtain almost all their knowledge of the world via scientific instruments, not through their senses. Yet our intuitions, languages, metaphors and myths develop from our daily experience. …. One of the tasks of art-science collaboration is to short circuit this process, making current scientific knowledge intimate. This is no decorative activity, it is part of the toolkit to allow us to survive the decades ahead. - Roger Malina

On the one hand math and science are about finding motifs: looking at patterns to find the generating principles behind them, understanding the invisible mechanics behind phenomena that are clearly visible, finding canonical examples that tie together a variety of objects as instances.
Equally, they are about looking at examples and constructing instances while not losing the details - the correct curve to make a structure work, a pattern generated by the right amount of randomness, a shape which balances certain notions of density with emptiness.
Finding balance between these approaches, to work with them lightly and apply our learning in an exact and often playful way is what directs us.

The Vision at Srishti

Mathematical and scientific thinking are ways of understanding phenomena that surround us. This understanding can express itself in many ways- symbolically, visually, experientially, metaphorically or otherwise. Whether it is Da Vinci demonstrating a deep understanding of the laws of mechanics with his machines or Russell applying his analytic philosophy to “real life” problems, the ways in which math and science can be approached are varied. In constructing our individual worldviews, we put on the lenses given to us by other thinkers - Esher with his representation of infinity and the impossible, Archimedes holding up an artifice for every problem, Galileo who questioned accepted belief, Goethe looking at biological and natural structure through archetypes,...

Our vision is to take such reasoning, in all its avatars, out of the cathedrals and into the bazaars (with apologies to Eric Raymond) – where they can be inspected, used, exchanged, cut up and put together in different ways. Here, our workspaces are studios, workshops and the outdoors

These studios work with a broad palette of materials (including computers and simple microprocessors). Learners play, design and iterate to build things, exploring science and math through technology by making. We hope also involve youth and teachers from local schools and communities in these activities.

These are intense periods of a week or ten days where participants focus on working with a circle of ideas.

We connect here with citizen science at a variety of levels, looking at the environment around us. People from a variety of backgrounds interact here - design students from Srishti, rural and urban students from both formal as well as alternate schools, homeschoolers, interested youth and adults as well as the occasional curious passer-by. The online MeetUp group “Bangalore STEAMers” is used to facilitate many of these interactions.

and the processes we use are largely based on:

While the “Maker movement” is a recent manifestation of the act of making, the value of making as a personal activity has been explicitly stated by Gandhi (“The utterly false idea that intelligence can be developed only through book-reading should give place to the truth that the quickest development of the mind can be achieved by artisan's work being learnt in a scientific manner.” - The voice of truth)

Using ones hands to learn, manipulating material, imagining an object, planning its parts and processes and creating it physically, often reiterating to improve on what is and tinkering to make it work - these are the ingredients of making.

In this context, including the computer into our palette of materials opens up opportunities - generative rules to make patterns, experiment with images and patterns, visualise data in new ways, use maps to organize and communicate information which could be spread over time or space, implement sensors to extend our senses…

In this context is driven by the need to understand one's environment given the resources and tools that are available. The notion of ‘citizen science’ is inextricably tied into this as are the notions of self-reliance and independence. Related to this is the idea of taking ‘science’ out of the lab which has resulted in the “Lab in a bag” idea, and continues to evolve. 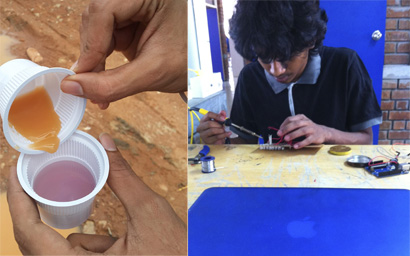 In the initial stages of an exploration play is a useful approach. The intuitive nature of play (trying things out without a clear final result in mind; being open to outcomes, being led by curiosity) leads the learner to make (constantly changing) rules and set problems for themselves. It is also where strong connections are made.

Being taken in the broad sense as ways of organising information (spatial, temporal or otherwise). Exploring ways of geolocating information (which could be rich in media and based on both story and observation) in ways which allow learners to drive their own investigations is a recurring theme. We aim to combine GIS methods with storytelling in ways that these complement each other, to give a whole which is larger than the sum of its parts. 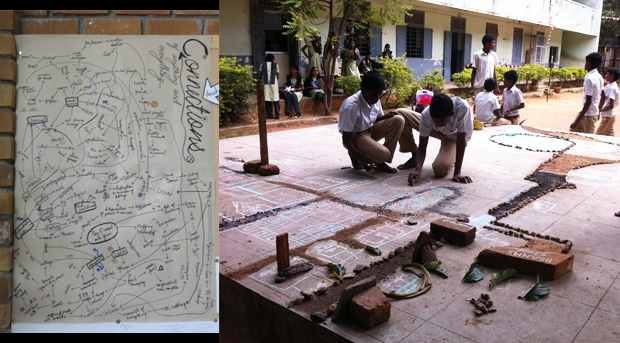 Is about making sense of what we see. In many contexts it involves constructing a theoretical model of how something works and thinking it through knowing which parts are rigorous and which are based on imagination. This allows one to demystifying processes that we may observe without fully understanding them.

and we work with people from various backgrounds

Children in the K-12 sector from a variety of social, educational and economic backgrounds. Activities range from ateliers that happen in school to camps and MeetUps - and often integrate Srishti students.

Youth in camps where often a livelihood component is also introduced. We have begun to introduce digital fabrication and modelling in these camps, and we see that access to such technology levels the livelihood playfield.

Teachers and facilitators from schools and learning centres who are looking at extending their practice. 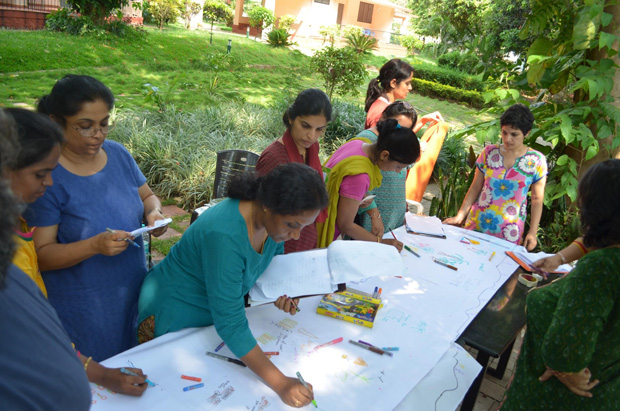 Design students from Srishti at the undergraduate and postgraduate levels in studios and projects. 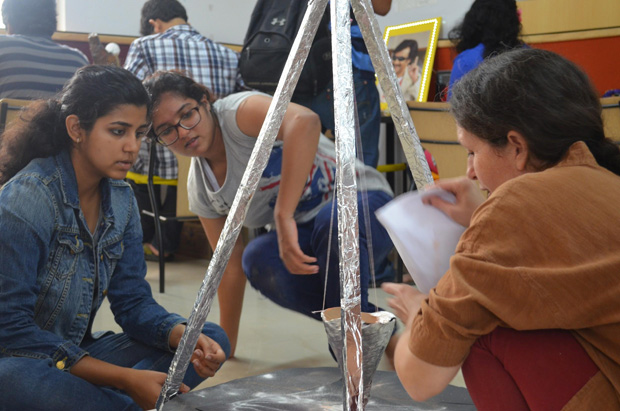 Some examples of work related to this discipline are

Play and Invent (thinking hands) - This studio course explored the use of mechanisms, and used some sensors and along with the Arduino to create interaction. 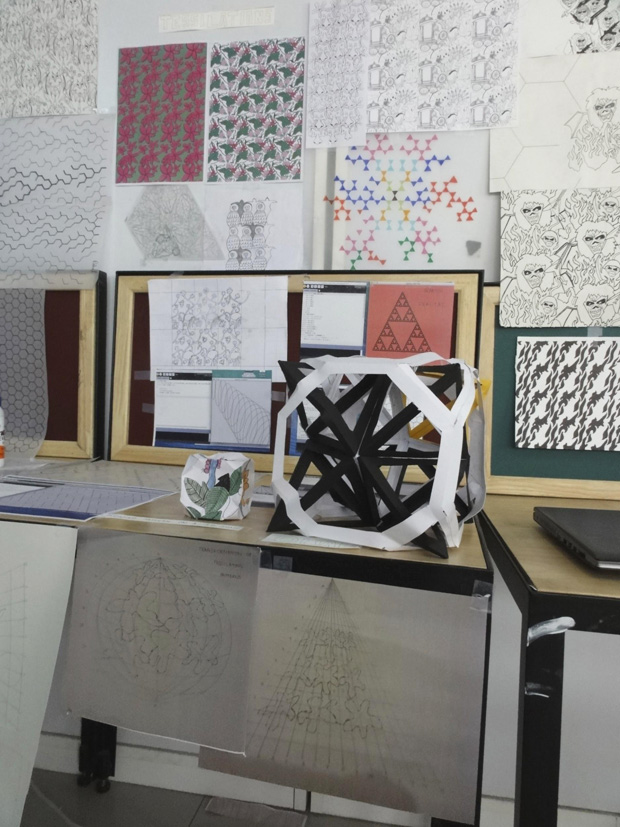 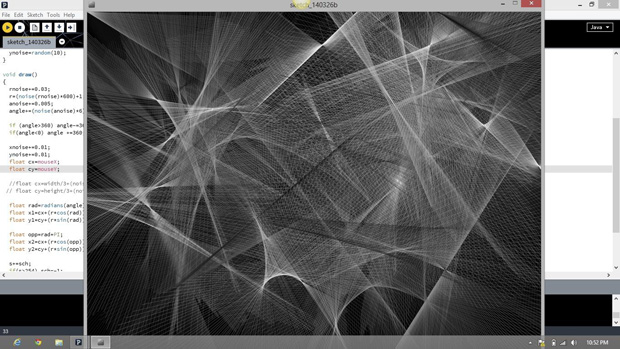 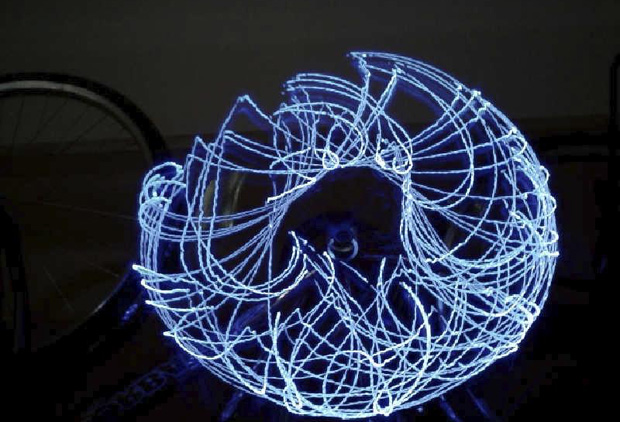 Mathematics of Planet Earth Exhibition - this six-month long course explored how ideas that relate to the mathematics underlying various (human and natural) processes can be explored and communicated by an exhibition. 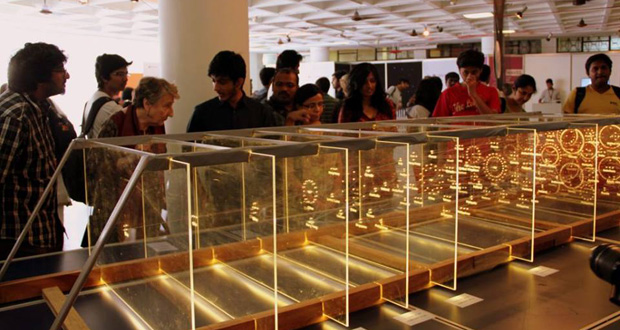 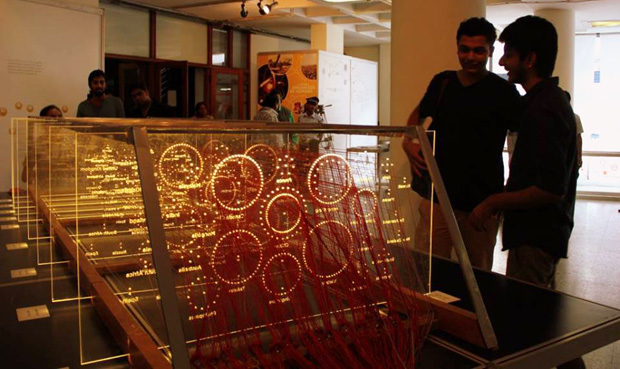 Geometry and Pop-ups: This camps began with exploring some of the basics of geometry in a school setting. These were then applied to design popups and cut them out, first by hand and when they became more complex using a computer controlled paper-cutter.

Meetup (On being Galileo): In this half-day meetup at the planetarium, we explored ways of looking at the sun and its movement. Using a simple telescope, we looked at sunspots and made estimations of their size. 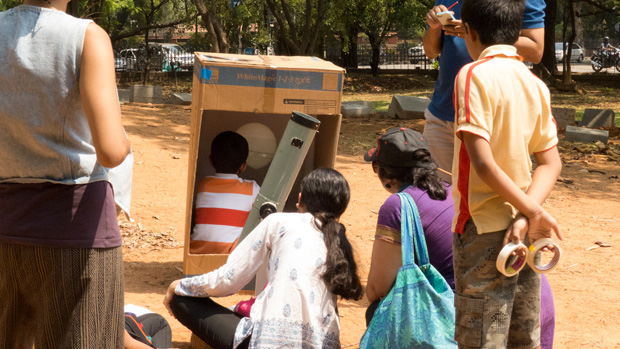 Meetup (Exploring Mallikere): In this meetup, people explored a dry lake bed and ways of describing what they saw using both artistic methods as well as mapping using a GPS. Some of the mathematics behind the working of a GPS were also discussed.

Art and design in now a recognised landmark in what was the landscape of STEM (Science, Technology, Engineering, Math) - and we have now moved on to talking about STEAM. However, examples of good STEAM pedagogy still seem few and far between. At this point, some clear paths of action are visible: