The Kabir Project at Srishti

“The well is just one, says Kabir
But water seekers, many
Our pots are all different
But the water in them is one” 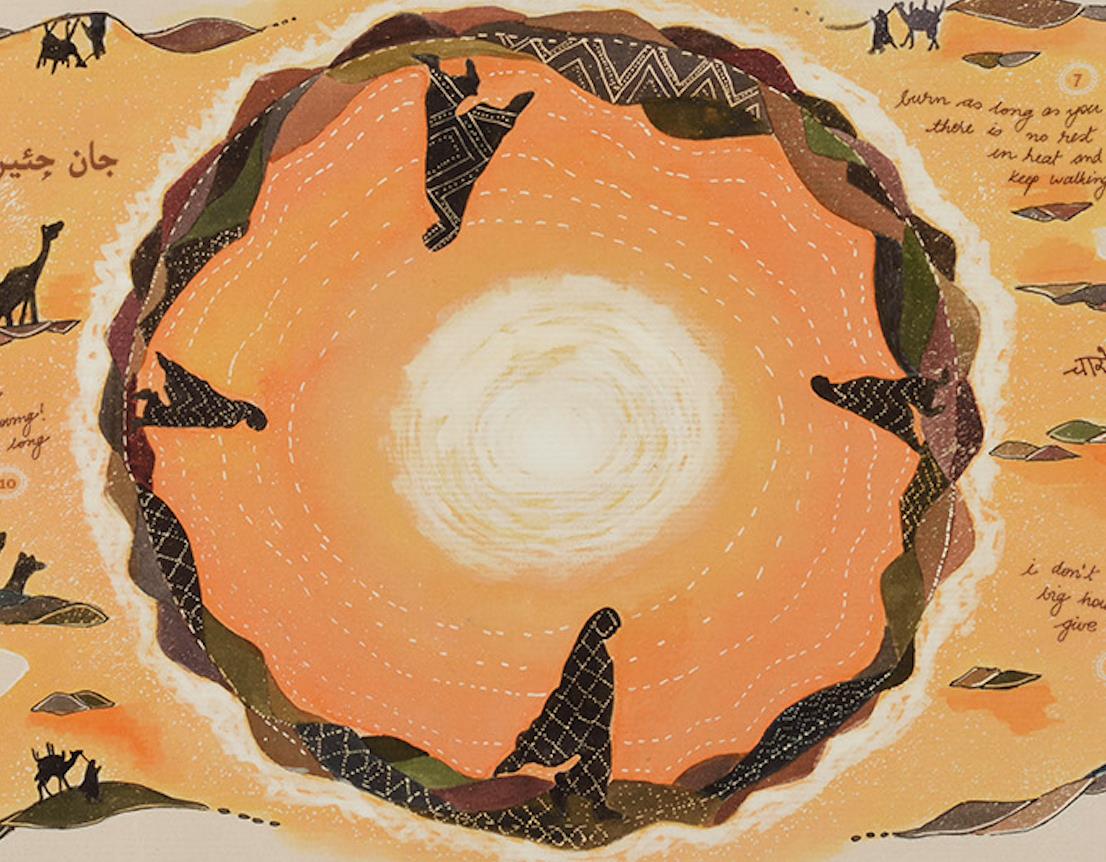 Artist Roy Varghese’s impression of Sasui created for an exhibition curated by the Kabir Project. Sasui is the indomitable woman seeker featured in the poetry of the Sindhi Sufi Shah Latif.

Fiercely iconoclastic in their social critique, Kabir and other Bhakti, Sufi and Baul poets urge us towards deep inner and outer transformations through the power of love and compassion. Their poems insist on an unblinking self-interrogation, asking us to reflect on how we construct and perpetuate narrow divides through identity, while also reflecting on life, impermanence and the human quest for meaning. In their poems a radical spirit of resistance is simultaneous with a profound surrender. This wisdom resonates through songs across the entire sub-continent in diverse poetic voices, creating a powerful warp and weft of mystic thought which dissolves boundaries of space and time. This wisdom, and its deeply plural origins and manifestations, is our core inspiration, and all our work seeks to contribute to its discourse and share it in new ways.

Over the last 18 years the Kabir Project has curated, translated and re-expressed this poetry and music through documentary films, music CDs, books, folk music concerts, urban festivals, travelling rural yatras, school workshops, exhibitions, college curriculla and a large web archive called ‘Ajab Shahar’ which is open to all. The Kabir Project was seeded at Srishti in the year 2002. (www.ajabshahar.org, www.kabirproject.org)

Work is ongoing towards expanding and enriching our web archive ‘Ajab Shahar’, a vast online repository of songs, poems, conversations, artworks and writings from and about the living oral traditions of Bhakti, Sufi and Baul poetry and music, which went live in July 2019. 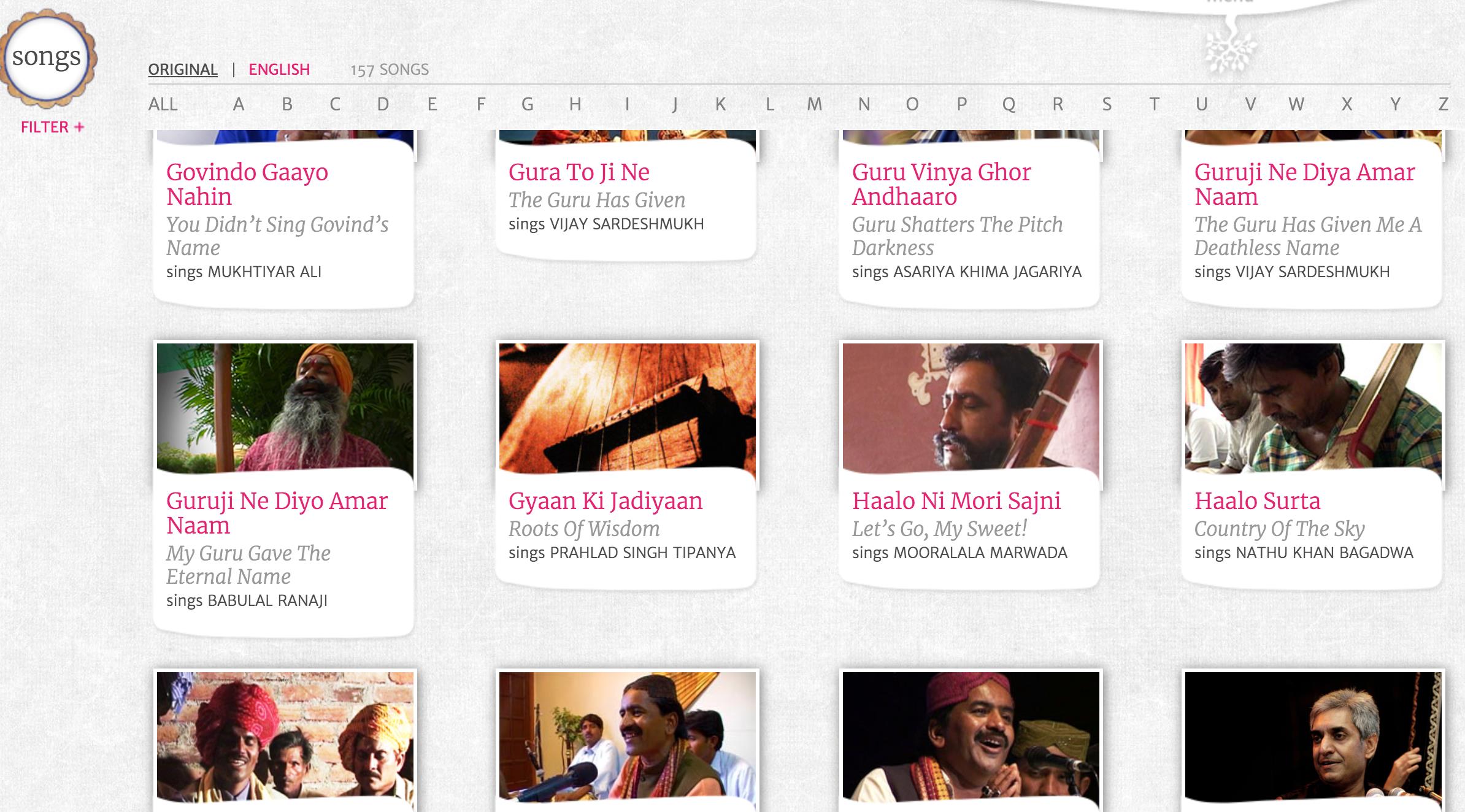 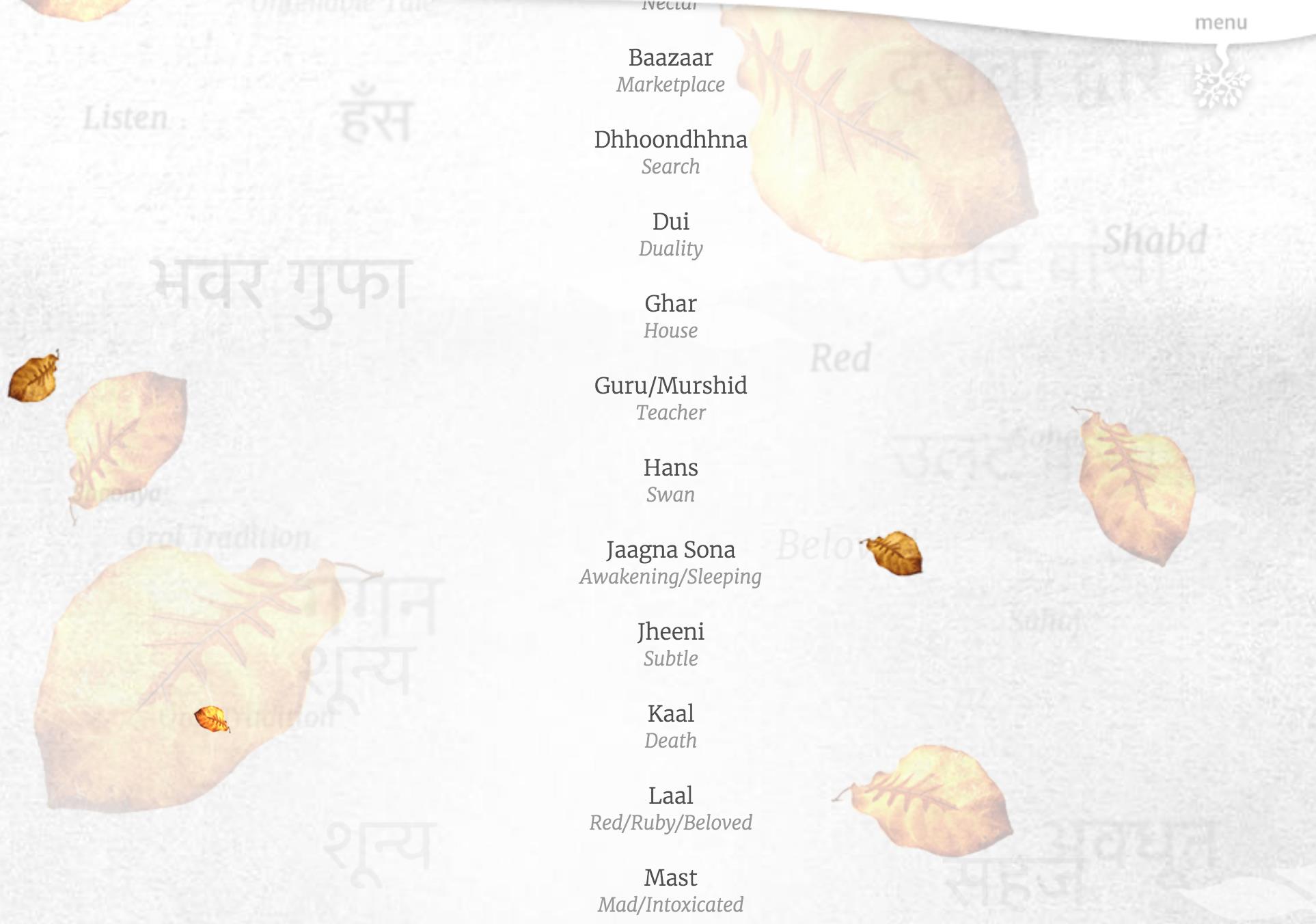 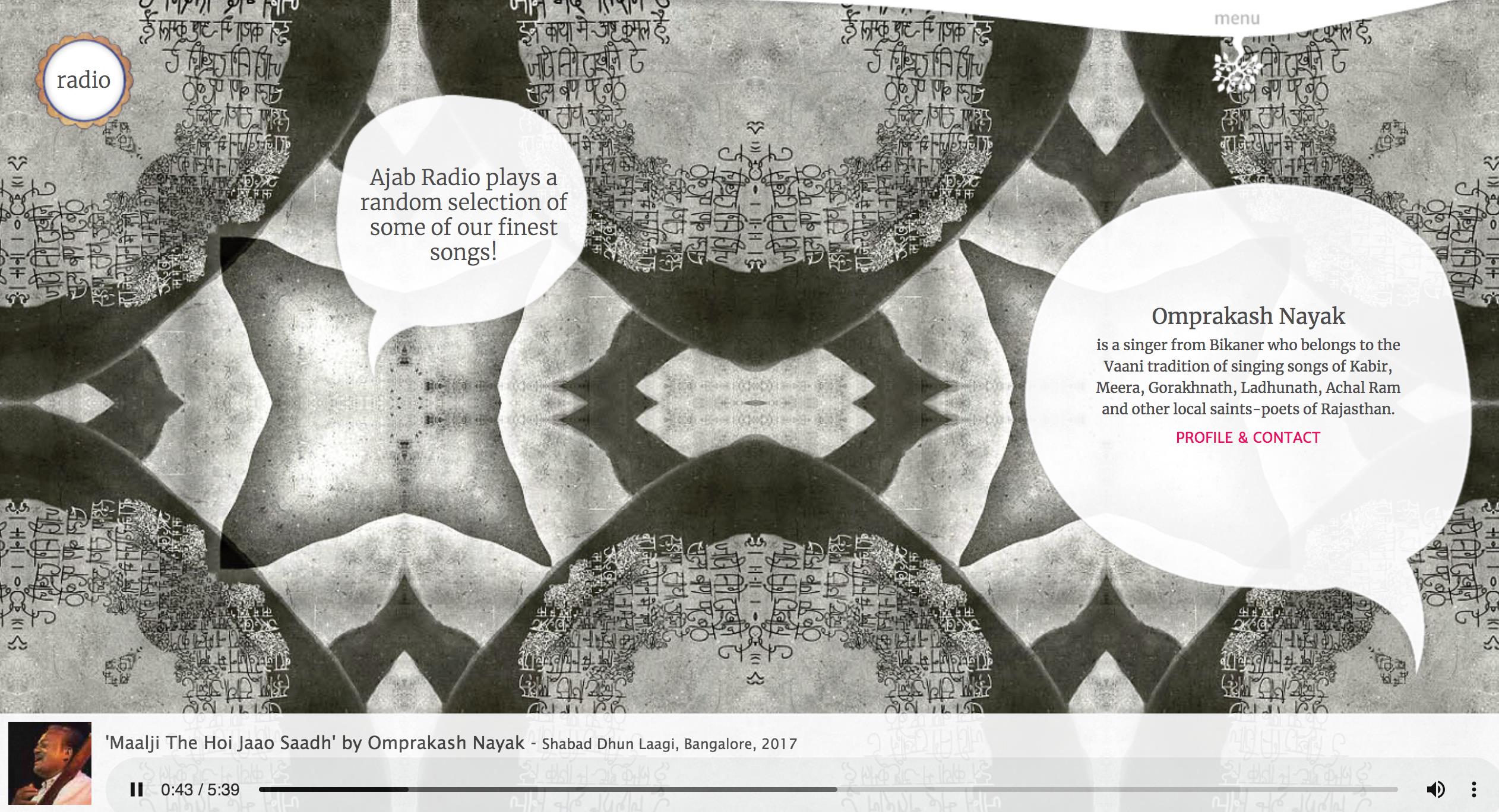 Bringing our research and writing over the last decade to fruition, two of our books on the mystic traditions were published in 2019 – ‘I Saw Myself: Journeys with Shah Abdul Latif Bhitai’ on the powerful voice of a Sufi from Sindh, co-authored by Shabnam Virmani & Vipul Rikhi (Penguin, July 2019) and ‘One Palace, Thousand Doorways: Songlines Through Bhakti, Sufi & Baul Oral Traditions’, authored by Vipul Rikhi with Shabnam Virmani, (Speaking Tiger, September 2019). These books are being shared through book readings with live concerts by folk singers of Shah Latif from Kutch in diverse literature and music festivals and events. 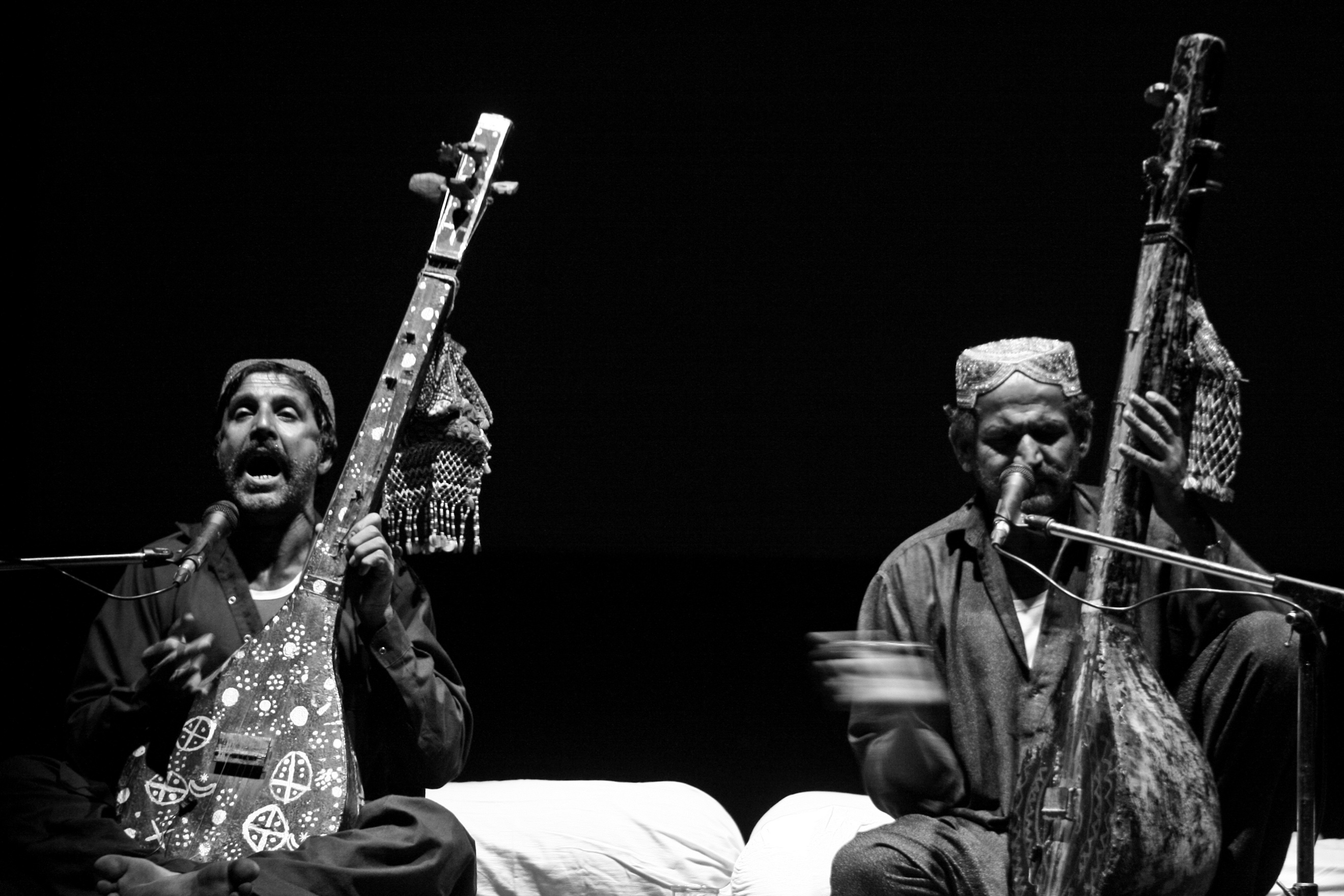 ‘A Cawing Clamour Fills The World: The World of Shah Latif’ – Sumar Kadu Jat and troupe & Mooralala Marwada and troupe sang the Waais and Kaafis of Shah Latif along with narration by Shabnam Virmani at an event in the Mumbai Festival of Kabir, Jan 2020.

Meanwhile, research and writing is ongoing for the book ‘Burn Down Your House: Life Lessons from Kabir’ (provisional title), authored by Shabnam Virmani, to be published by Aleph (upcoming). This book distills some of the core poetic and philosophic ideas of Kabir along with a translations of some of his most striking couplets and songs drawn from the oral traditions as well textual references from 'Sakhi' by Drs. Jaydev Singh & Vasudev Singh. 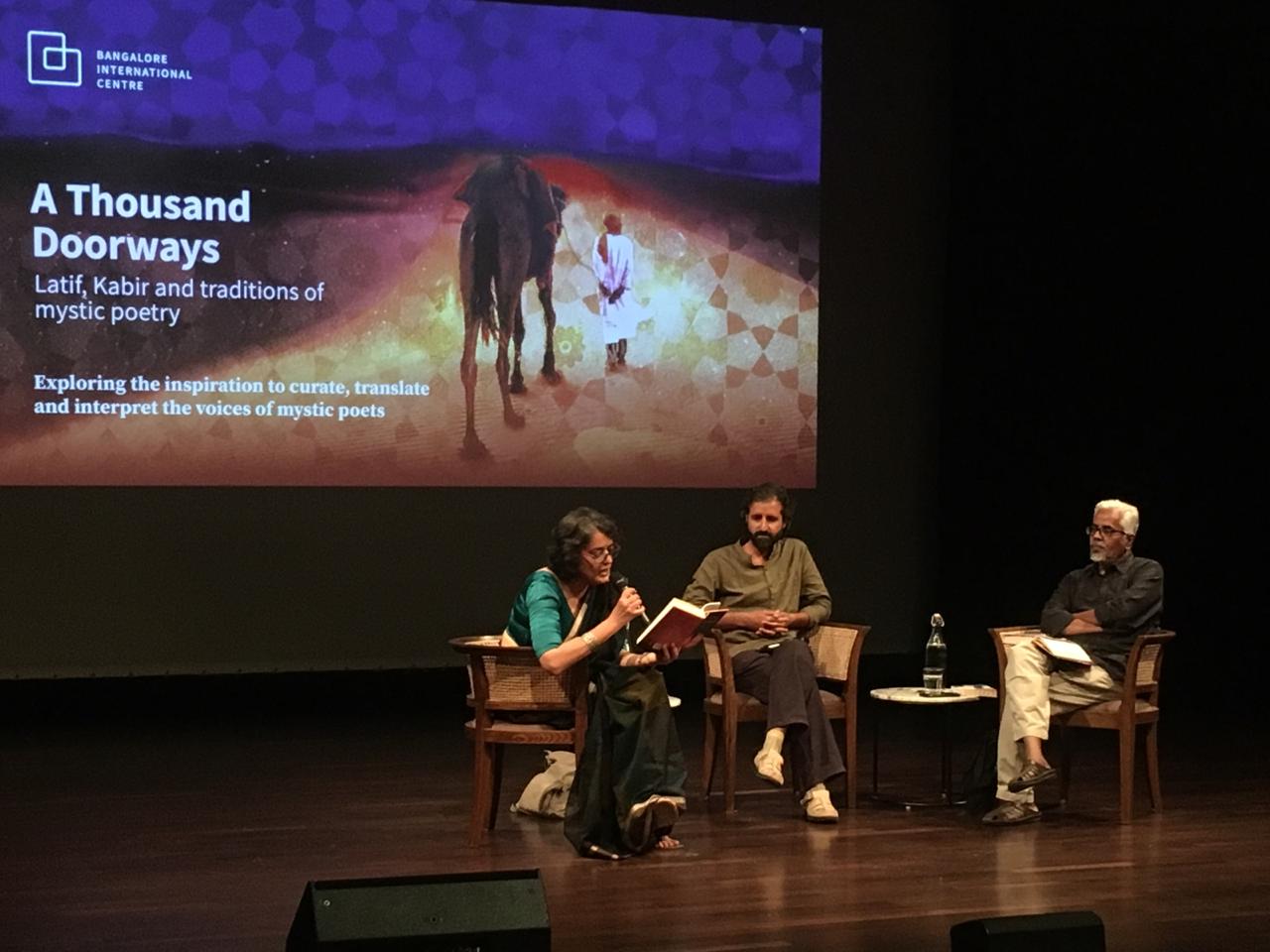 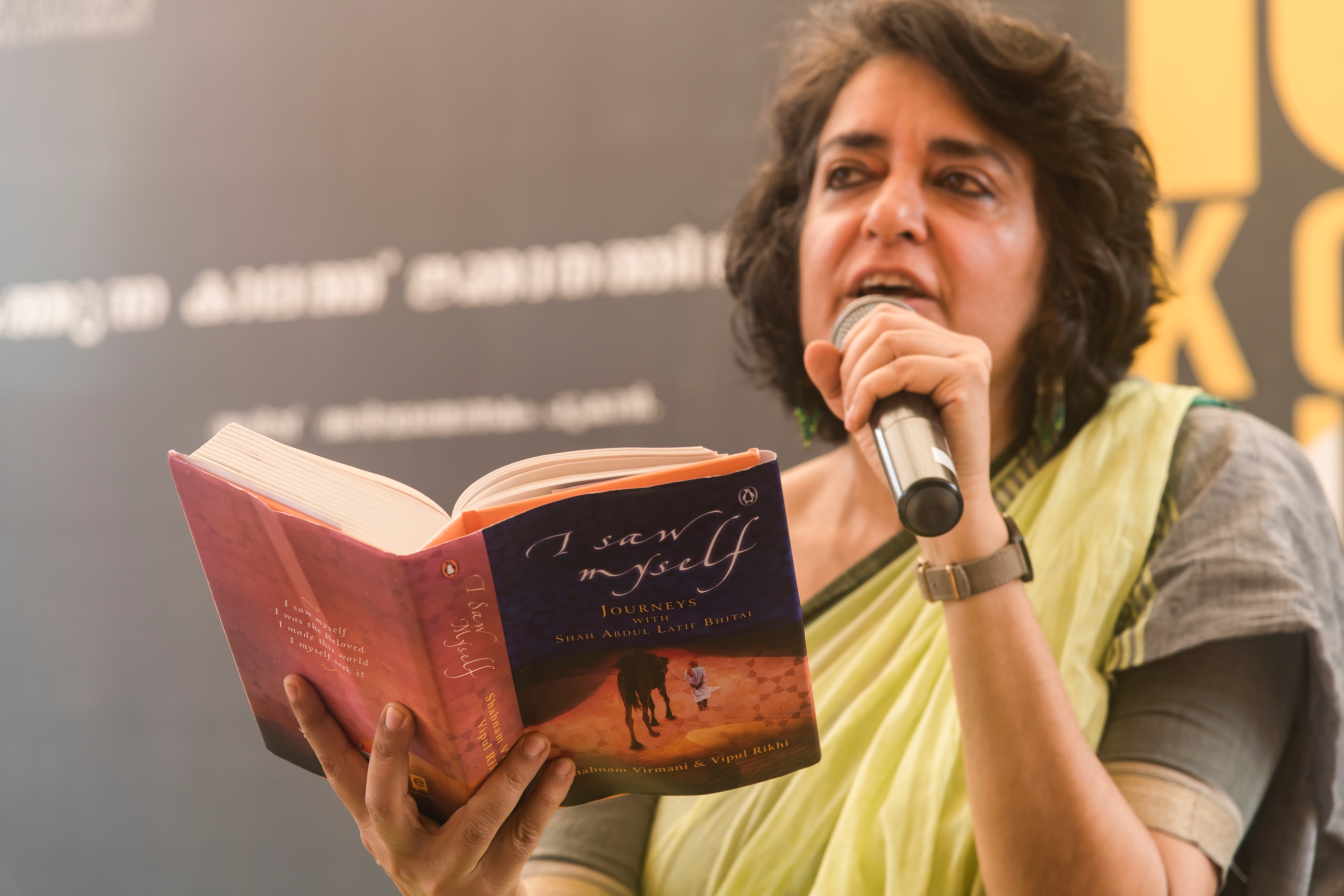 Shabnam reads from the book ‘I Saw Myself’ at the Kondotti Sufi Festival, Calicut, November 2019. 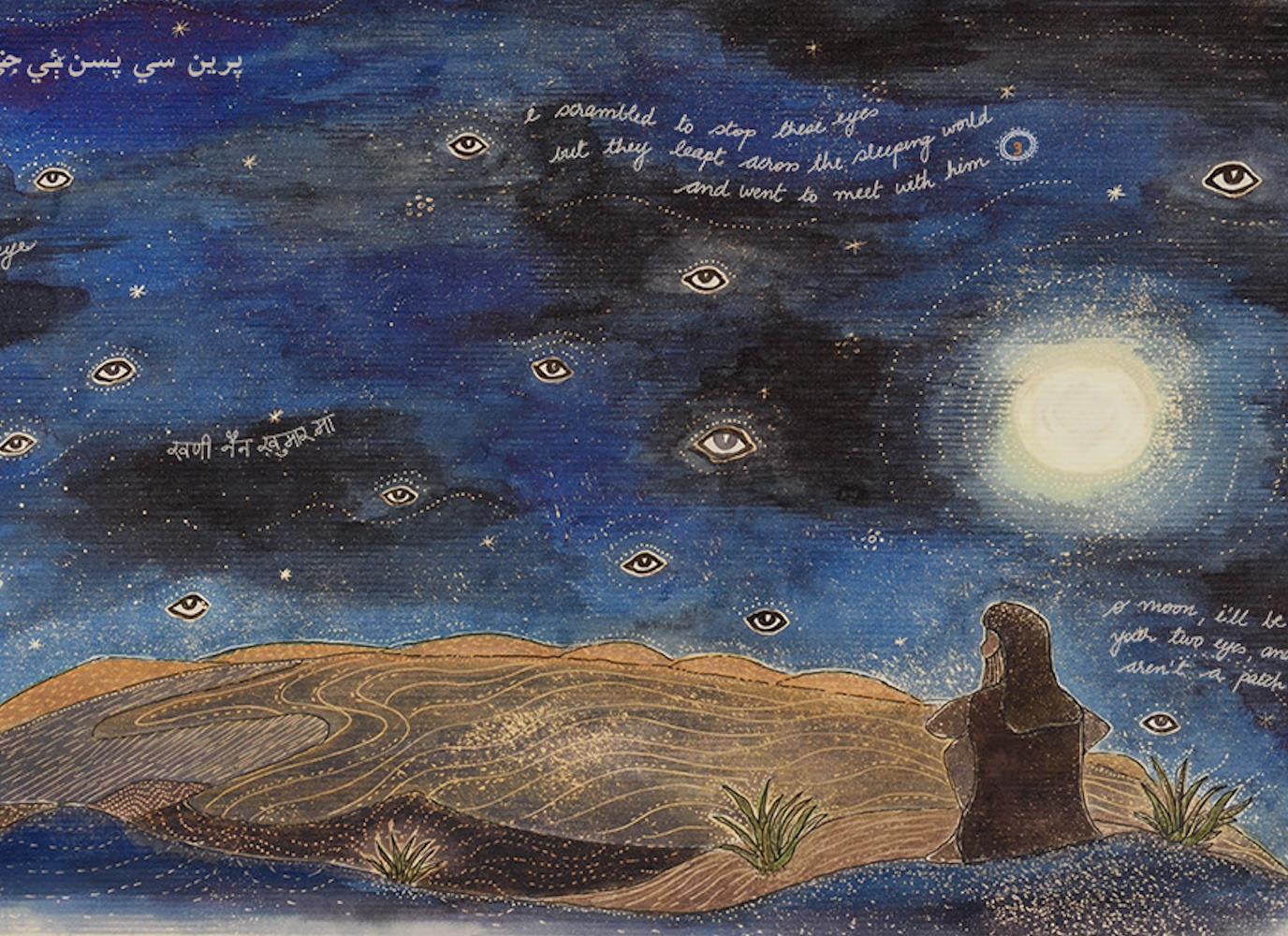 Prashant Parvataneni devised and taught a new course - Oral Traditions of Knowledge : Sufi and Bhakti Poetry - using the Ajab Shahar web archive as reference text with students of Christ College, Bangalore. The course offered a space for appreciating songs as poems and cultural texts, understanding the aesthetics and politics of diverse musical styles and poetic traditions, and identifying key themes, metaphors, and idioms that preoccupied mystic poets. The goal of the course was to create a dialogue between contemporary questions of knowledge, power and identity and the poetic insights of the mystics to generate novel frames and perspectives to look at the modern self in relation to the world.

Infecting seekers and students with the spirit of song and mystic philosophy through ‘Gaaye So Paaye’ Shabnam continues to take a bi-weekly singing class for Srishti students and others dedicated to an immersion in the oral folk traditions of Bhakti, Sufi and Baul songs from the regions of Malwa, Rajasthan, Gujarat, Sindh and Bengal. 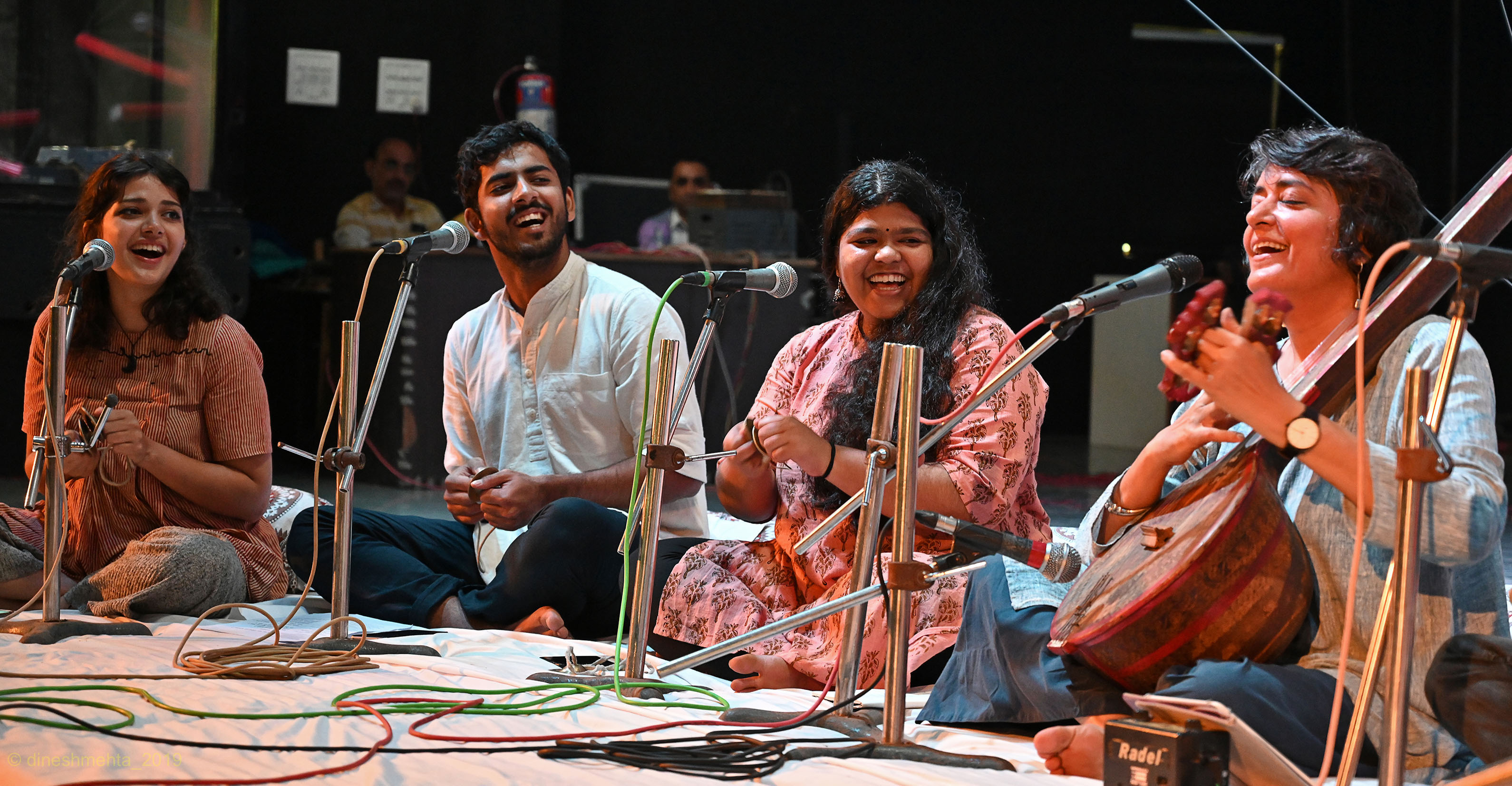 Srishti students join Shabnam Virmani on stage in a concert during the Gujarat Kabir Yatra, September 2019.

As part of his apprenticeship with the Kabir Project PGDP student Swagath Sivakumar is completing work on a series of three hour-long podcasts which interweave fiction, conversation, poetry and music while engaging with the wisdom of the mystics on the themes of ‘Fear and the Mind’, ‘Love and Non-duality’ and ‘Truth and Reality’. 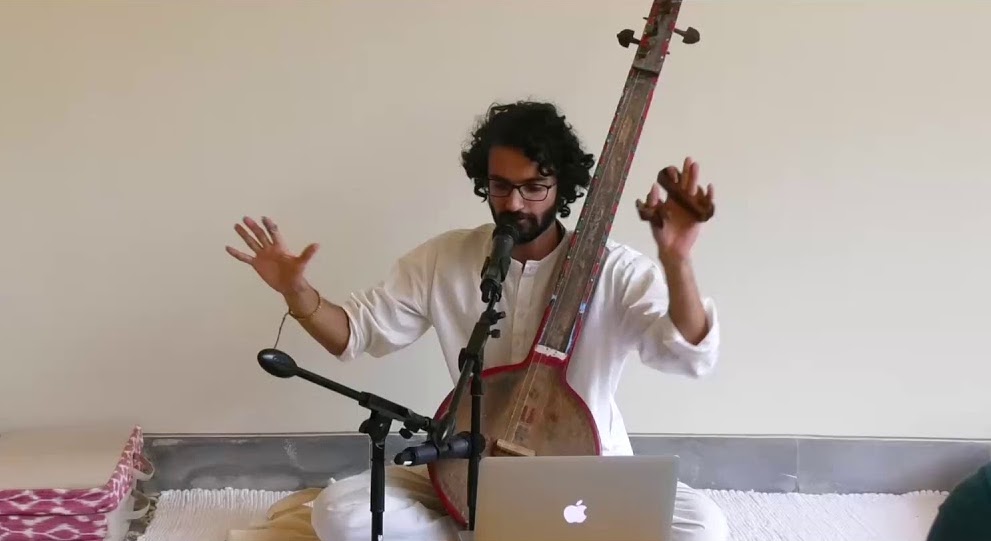 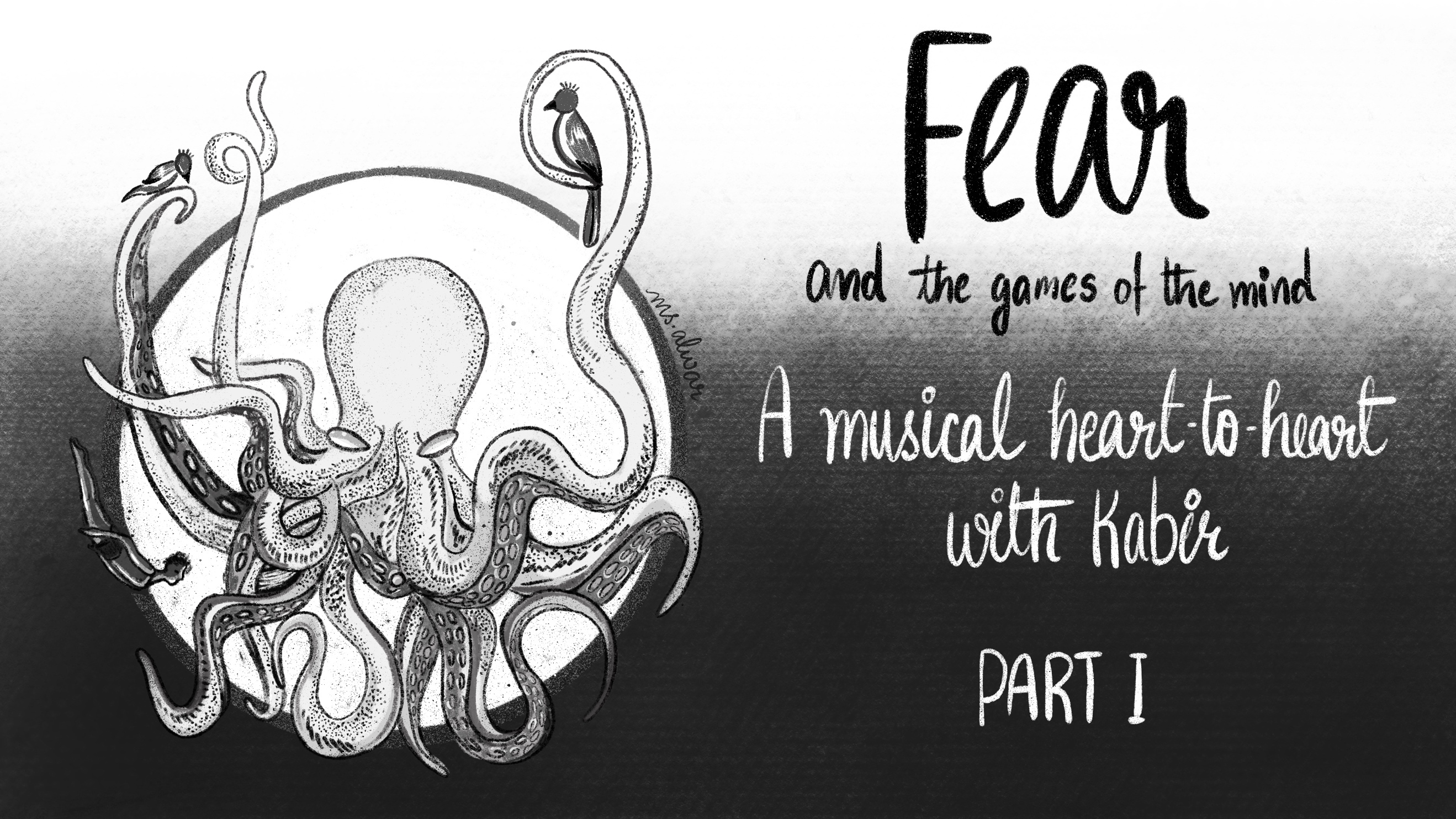 Podcast created by Swagath Sivakumar - Fear and the Mind: A Musical Dialogue with Kabir.

Rural Yatras and Other Events

Our participation in the living oral folk traditions of Vaani (mystic poetry) continued at the village level through the diverse Kabir Yatras, while also creating opportunities for exposure and immersion for Srishti students and other seekers by travel to these rural events.

Several collaboration emerged with diverse individuals, folk singers and institutions across the country to share the wisdom of the mystics through talks, workshops, film screenings and concerts, including. 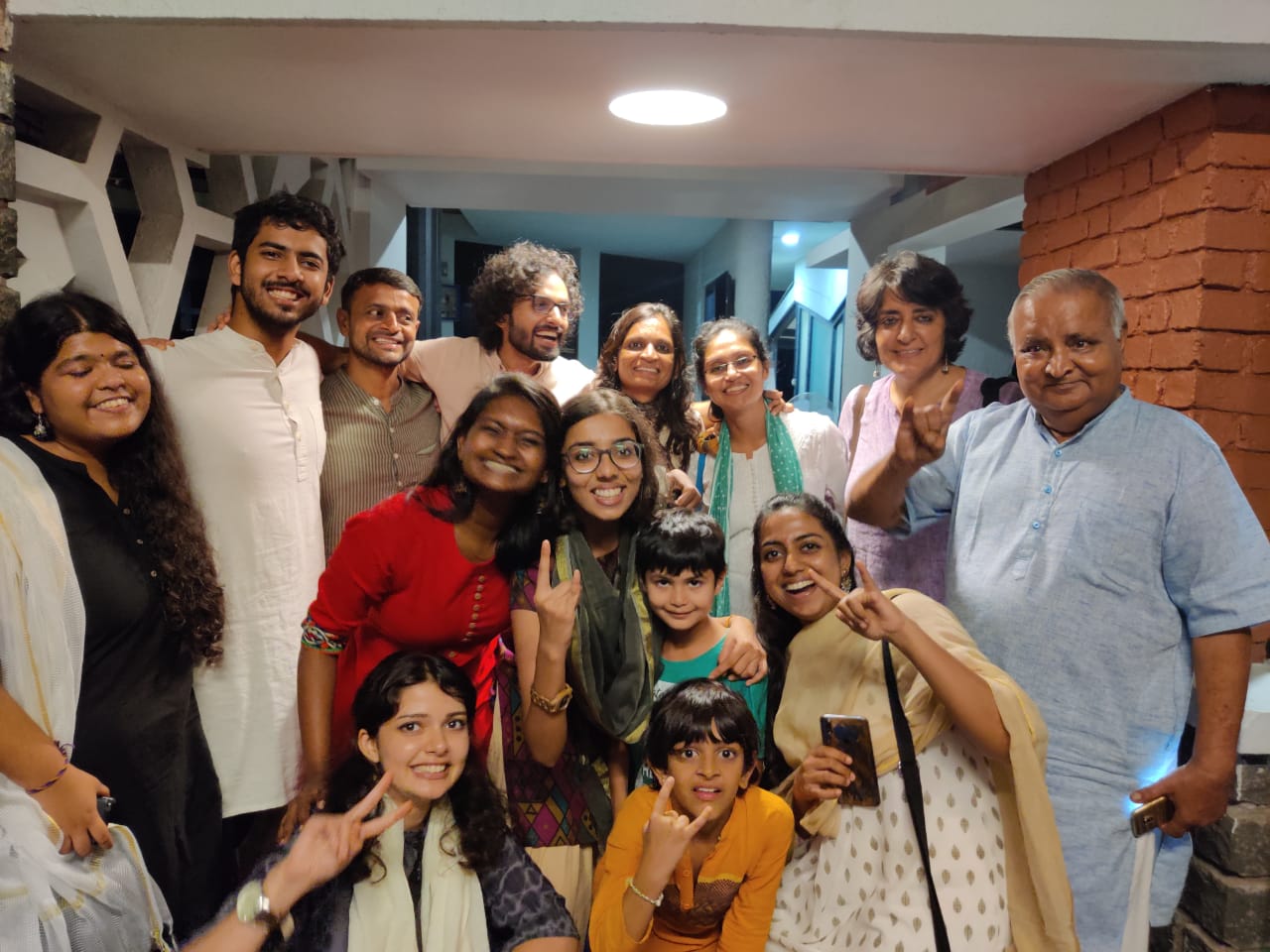 Renowned Gujarati writer Dhruv Bhatt along with Shabnam Virmani and students of Srishti during the Gujarat Kabir Yatra, September 2019. 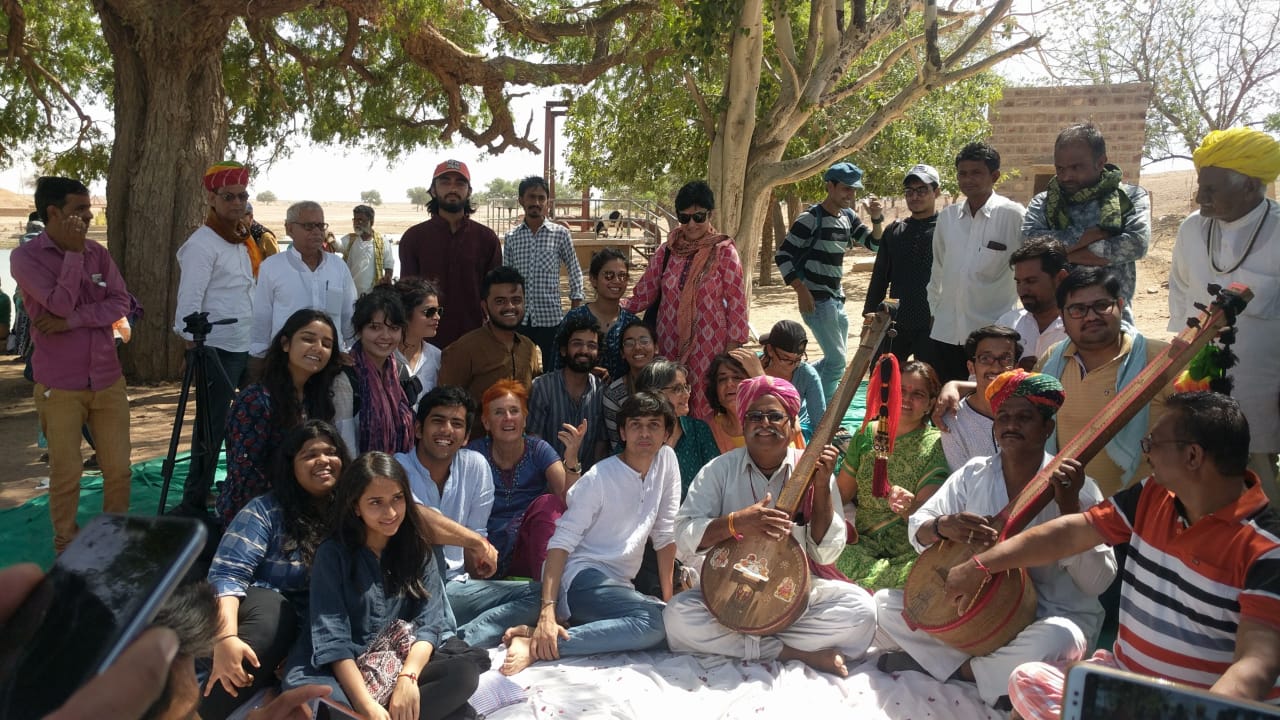 Rajasthani folk singers Mahesha Ram & Bhalu Ram with Yatris and students of Srishti during the Rajasthan Kabir Yatra in October 2018.

The Kabir Project is an inter-disciplinary space open to students (PGDP apprenticeship) keen to work with any from of research inquiry or creative expression, using the tools of research, writing, video, audio, graphic art, song, performance or any other artistic or knowledge-based hands-on inquiry.

Students are also welcome to join the ‘Gaaye So Paaye’ bi-weekly singing class to learn folk songs of mystic poets from the oral traditions of Malwa, Rajasthan, Gujarat, Sindh and Bengal and engage with the philosophy of the mystics.

For more information about this lab, kindly email Shabnam Virmani at shabnam@srishtimanipalinstitute.in

The Kabir Project at Srishti